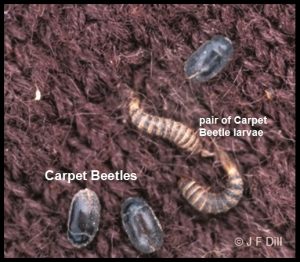 Four species of carpet beetles are of major concern in Maine. Most important is the Black Carpet Beetle, which is black in color (as its name implies), oval and less than 1/4 inch long. The beetles are good fliers and are attracted to light, so finding adult beetles on windowsills is often the first sign of infestation. Varied Carpet Beetles that are from outdoor populations are also attracted to light. In the case of indoor populations of the Varied Carpet Beetle, however, there exists a negative attraction to light, with just one exception: indoor females nearing the end of their oviposition period gradually become attracted to light.

The larval stage of carpet beetles is what does most of the damage. Even though they are called carpet beetles, the larvae feed on many other items. Preferred foods include animal products, such as skins, furs, feathers, wool, hair and dead insects, but they also eat cotton to some extent. They are known to eat holes in yarns that are blends of wool and synthetic fibers.