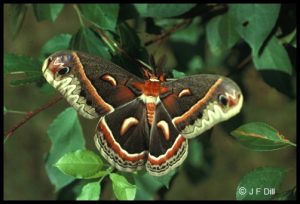 The Cecropia Moth (Hyalophora cecropia) is a type of moth referred to as a giant silk moth (family Saturniidae).  It is North America’s largest native moth, with wingspans of over 6.2″ having been documented! It is distributed throughout the US as far west as the Rocky Mountains, and extends north into the maritime provinces of Canada.  The caterpillars (3 to 4 inches in length and shown below) feed heavily on leaves and are found most often on Maple trees, but they have also been found before on many other kinds of trees including (but not limited to): wild cherry, alder, birch, box elder, plum, apple, dogwood, and willow. The adult moths do not have mouthparts and so do not feed; they survive from their body fat stored up during the caterpillar stage. 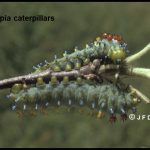 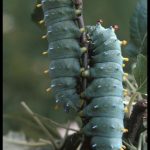