Cicadas (family Cicadidae) are large (over 1″ long) insects with clear wings that rest in a roof-like fashion atop their abdomen. Many people are familiar with the loud ‘song‘ that male cicadas produce, and the unique nature of a cicada’s life cycle (usually involving many years underground in a juvenile stage).  The well-known North American ‘periodical’ cicadas (genus Magicicada) take either 13 or 17 years, depending on the species, before emerging (en masse) as adults.  There are four species of periodical cicadas that have a 13-year life cycle and three species that have a 17-year life cycle.  None of the periodical cicadas live in Maine, however.

Most of the North American species–including most in Maine–belong to the genus Neotibicen which is comprised of the ‘Annual’ or ‘Dogday’ cicadas, which emerge from the soil during the ‘dog days’ of summer (late July and August) as nymphs and then quickly molt to the adult stage.  They are named “annual cicadas” because some of their members emerge every year as adults.  Individual nymphs of annual cicadas remain underground for anywhere from 2–5 years, but in any given year, some of those will be ready to emerge.

The first task of the nymphs is to climb a foot or two up off the ground and molt to the adult stage, leaving behind an exoskeleton that looks like something borrowed from a Sci-Fi thriller (see photos).  In fact, in Maine it is more common to discover a cicada’s shed exoskeleton than it is to find an actual cicada.  This is because they are strong fliers that spend their time high in the trees, so without the mass emergences that take place in other regions of the country, one is not very likely to encounter one in Maine very often, making them largely a thing of curiosity for anyone unfamiliar with them.

Cicadas feed on the xylem [which contains upward-flowing water and nutrients] of woody plants using a straw-like/needle-like mouthpart. Females lay their eggs in bark or twigs. When the eggs hatch, the nymphs (juveniles) burrow underground and feed on the roots of the tree. 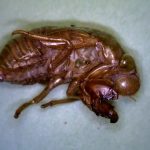 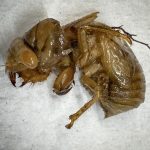 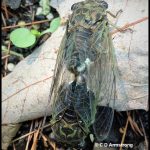 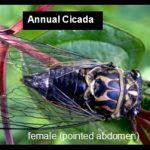 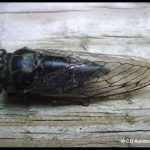 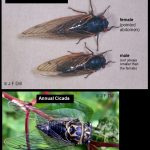 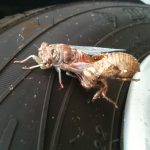 A newly-molted Cicada and its former exoskeleton; Photo courtesy of April and Lee Townsend (Portland, ME)

The shed exoskeleton of an Annual Cicada following a molt