Found nearly the world over, the Codling Moth (Cydia pomonella) [family Tortricidae] is a key pest of apples, first introduced to our continent from Europe by early settlers. It can infest other fruits as well, including pears and quinces, but it does very well in apples and requires vigilant management by apple growers.  It goes through two generations in most regions of the U.S. but in the Pacific Northwest there is a partial third generation that is produced. The damaging stage is the caterpillar/larva stage, and it is the proverbial “worm in the apple” that everyone thinks of. 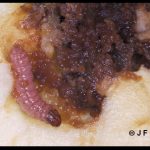 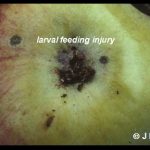