The Corn Earworm (Helicoverpa zea) (formerly in the genus Heliothis) is a major pest in agriculture, affecting not only corn, but many different crops. It is serious enough in cotton and tomato to warrant a separate name in those crops: Cotton Bollworm and Tomato Fruitworm. The insect is also abundant in the wild, which is a major reason for its overall success. The larvae vary tremendously in color, ranging from yellow to green to brown or even purple. They are very aggressive and will even bite (and sometimes, reportedly, they will even eat one another).

Corn earworm is distributed worldwide but it cannot overwinter in the northeastern United States. The moths migrate to Maine from southern states around mid-July. The night-flying female moths search for fresh (green) corn silk on which to lay their eggs. The eggs are laid singly on the silk, although several may be laid on one silk mass. Each female can lay several hundred eggs. If fresh silk is not available, they may lay eggs on other hosts such as tomatoes or peppers. The eggs hatch in two to 10 days. The newly-hatched larvae feed on the corn silk, working their way down the silk channel to the tip of the ear. Once there, the larvae feed on the silk and developing kernels. The feeding area becomes filled with moist waste. This damage causes severe economic loss, and may go unnoticed until harvest. 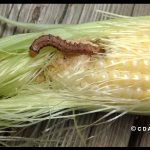 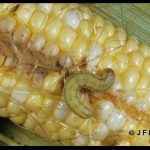 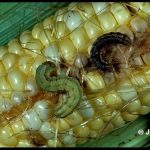 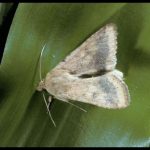 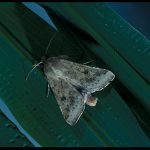