Dobsonflies (genus Corydalus) are large and rather fearsome-looking insects (they raise their heads and open and close their jaws to try to intimidate, often quite successfully). They are primarily nocturnal, are more common near bodies of water, are active from late spring to mid-summer, and are attracted to lights. Both males and females can reach up to five inches in length, and although the rather frightening pincer-like mandibles of the male are much larger and more intimidating in appearance than are the female’s, they are so large that they afford weak leverage and are thus incapable of breaking a person’s skin. They are mostly ‘all show,’ so to speak, for impressing females, but also they are used for grasping a female during copulation. The mandibles (pincers) of the female, however, are short and stout and thus capable of inflicting a painful–but not venomous–bite (they are strong and sharp enough to draw blood). 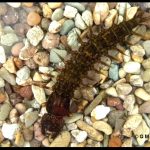 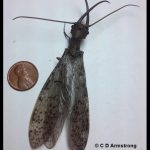 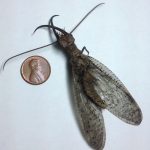 Ventral view of the specimen shown at left 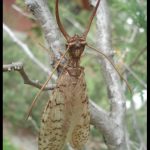 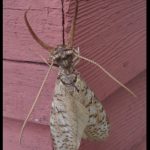