Most people are familiar with dragonflies (in the insect order, Odonata), with their large, multifaceted eyes, two pairs of strong, transparent wings, and long skinny bodies. However, not everyone may know that they are valuable predators that eat mosquitoes, flies, wasps, flying ants, etc. — most any small insect that they can overpower and consume without ever needing to alight. They attack and feed on their prey whilst flying, so it is not surprising that they are some of the fastest insect flyers in the world. Their larvae are aquatic, and so the adults are usually found most abundantly near bodies of water. 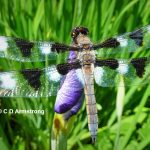 A dragonfly at Coastal Maine Botanical Gardens in Boothbay, ME; 7/3/2012. 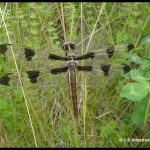 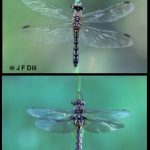 Dragonflies (their larvae are aquatic) 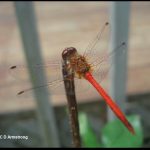 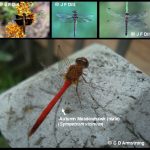 Dragonflies are similar to damselflies, but they hold their wings out to the sides of their body, i.e. perpendicular, while at rest, compared to parallel to the body in the case of damselflies.

At least 158 species of dragonflies have been documented in Maine, comprising nearly 36% of the total number of species identified thus far in North America.