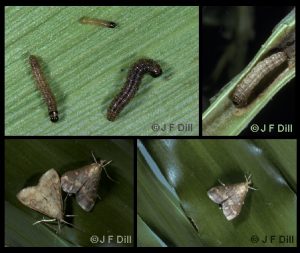 The European Corn Borer (Ostrinia nubilalis) is a serious pest of grain, especially corn.  It is a pest which was introduced to the U.S. from its native European continent (was first reported in North America in 1917 in Massachusetts but is suspected to have most likely been introduced years earlier than that).

European corn borer caterpillars chew tunnels in both the ears of corn as well as the stalks.  The tunneling damage inside the stalks causes the plants to fall over, and disrupts, obviously, the plant’s ability to transport water and nutrients up and down within the stalk, stunting it.  The fully-grown larva is three-quarters to one inch in length, and generally/usually flesh-colored, but varies from that to other shades such as light gray and light pink. Also, they have distinctive small and round brown spots on each segment.

European corn borer can successfully overwinter in most of New England, with moths emerging in mid to late June.  The moths–which are about one inch long–vary in color from yellowish brown to dark tan with two dark, irregular, wavy bands across the front wings. The male moth may be somewhat darker in color and slightly smaller than the female.