The European Pine Sawfly, Neodiprion sertifer (Geoffroy), is an insect that infests pines and is originally from Europe, as its name suggests.  It was accidentally introduced to the U.S. in 1925.  It prefers Mugho/Mugo, Scots/Scotch, Japanese red, Jack and Swiss mountain pines, but it will also survive on eastern white, Austrian, Ponderosa, shortleaf and pitch pines though it is described as rarely feeding on those.  It is now a very common resident of pines in landscapes, Christmas tree farms, and ornamental nurseries.  It is established from southwestern Ontario through New England and west as far as Iowa.

The damaging stage of this pest is the caterpillar-like* larval stage which takes place from mid to late May and lasts through June.  The larvae eat the old needles from previous years and will leave current-year needles unscathed, so the injury won’t kill the host tree but repeated loss of old needles can slow the growth of the tree and can look unsightly.  In order to appear more menacing, the larvae feed in groups and raise up their heads when disturbed (many sawfly larvae exhibit this head-rearing behavior).  The larvae will strip an entire branch of its old needles before moving on to another branch.  Occasionally they may also feed on the bark of new shoots which can result in the death of the twig.

Pupation occurs in the soil or on the trees themselves, and then the adult sawflies–which resemble wasps (see photo link below)–can be found from early September through late into the fall.  Mated females lay their eggs on the current season’s needles out near the ends of the branches.  There is only one generation per year.

*Sawfly larvae look like caterpillars but they are actually the larvae of primitive wasp-like insects. 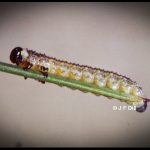 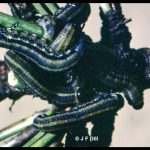