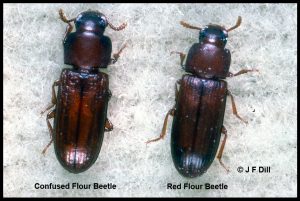 Flour beetles are a type of darkling beetle (genus Tribolium and genus Tenebrio).  They consume wheat and other grains, and are adapted to survive in very dry environments.  They are not known to carry or spread any diseases that affect humans, nor do they attack anything other than grain or starch foods (at least not for very long).  However, in search of their favorite foods, they may become an annoyance, invading all areas of a home.  They are a major pest in agriculture and are highly resistant to insecticides.

There are two flour beetles commonly found in Maine: the confused flour beetle and the red flour beetle.  They are similar in habits and appearance, and both beetles primarily infest flour and, to a small extent, foods made of processed grains.  Confused flour beetles and red flour beetles are often found together.  Even though they cannot attack whole grains, there are usually enough broken kernels and grain dust available (caused by the rubbing of grain during handling) for these beetles to survive. Any home can be invaded by these beetles through the transportation and storage of grains or grain products such as cereals, macaroni, flour, birdseed, etc. 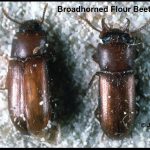 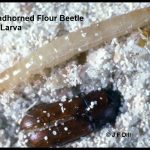 A Broadhorned Flour Beetle and a larva of the same species 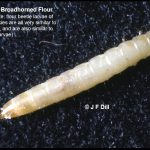 Larva of a Broadhorned Flour Beetle 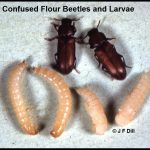 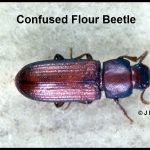 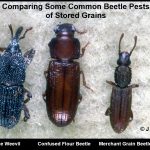