Fungus gnats are small, dark, short-lived (7 to 10 days) flies whose larvae feed on plant roots and fungi, thereby contributing to the decomposition of organic matter.  The adult flies are only 2–5 mm long but are nevertheless important pollinators for both plant pollen and mushroom spores.  Fungus gnats are often a nuisance indoors, however, where their numbers can quickly build (depending on the severity of the infestation), hatching out from potted plants or containers with damp soil that is rich in organic matter.  Their eggs are deposited in the soil and the entire life cycle from egg to adult can take as little as 20 days.  They are attracted to lights, which can be particularly aggravating when they flit about on one’s TV/computer monitor or iPhone/tablet, etc. screen.

The root-feeding that is done by fungus gnat larvae can harm many plants, causing stunting and wilting (see the fact sheets below for more information and for management strategies you may wish to employ to reduce or eliminate their numbers). The larvae are also capable of transmitting certain soil-borne plant pathogens. 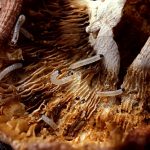 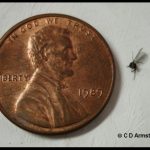 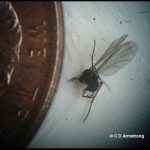