The Hemlock Woolly Adelgid (Adelges tsugae), often abbreviated as HWA, is a very small (1/32″ long) invasive Hemipteran (‘true bug’) that feeds on sap that it sucks from hemlock trees (Tsuga spp.).  It was accidentally introduced to western North America from its native Asia in 1924, and eventually–decades later–worked its way to the eastern United States, where it has caused widespread mortality of hemlock trees.  Over one-third of the native range of hemlock in the eastern US is now infested with HWA.  A quarantine has been established for Maine, New Hampshire, and Vermont.  Nevertheless, southern areas of all three of these states now have pocket HWA infestations.  Note: The revision of the Hemlock Woolly Adelgid Quarantine Rule went into effect as of 9/25/2013.

The desiccation caused by HWA feeding causes the tree to lose its needles and not produce new growth. In the northern portion of the hemlock’s range, the color of the hemlocks infested by HWA will typically change from their healthy, dark green color to a sickly, grayish-green color after just a few years, and death typically occurs four to ten years after an initial infestation.  Any trees that do manage to survive the direct effects of a HWA assault are usually weakened to the point where they may die from secondary causes.

HWA reproduces asexually and, in North America, goes through two generations per year.  The egg sacs are what people look for when searching for signs of HWA infestation, because they are very distinctive, resembling small tufts of cotton that cling to the underside of the hemlock branches.  Between 100 and 300 eggs are laid in each one of these sacs!  Larvae emerge in the spring and can spread on their own or with the assistance of wind, birds and/or people or other mammals.  Avoid placing bird feeders in or near hemlocks to discourage birds from landing there and potentially spreading HWA larvae. 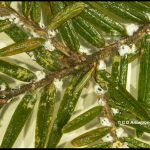 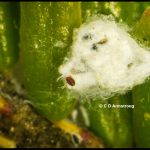 Hemlock Woolly Adelgid (nymph/”crawler” stage; visible in center of photo) (Mount Desert, ME; June 23rd, 2021) The nymphs (“crawlers”) are reddish-brown in color and have legs so that they can migrate to new locations on the branches where they subsequently settle permanently into place. 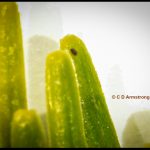 Hemlock Woolly Adelgid (nymph/”crawler” stage; one is shown here at the tip of one of the needles) (Mount Desert, ME; June 23rd, 2021)

Hemlock Woolly Adelgid (winged adult) A winged adult hemlock woolly adelgid is rather rare. They fly off in search of spruce trees to infest, but they’re incapable of establishing themselves on any of our USA species of spruce trees.