The Hickory Tussock (Lophocampa caryae), is a type of tiger moth that is a member of the Erebidae family of Lepidoptera. The caterpillars are visually distinctive, with tufts of white and black hairs (setae) and black warts on their bodies.  Their bristlelike hairs can cause a rash in sensitive individuals (see Tussock Caterpillars).  The caterpillars feed on a wide variety of hardwood trees, including hickory, pecan, walnut, American hornbeam, ash, elm, oak and willow, to name only a few. According to the Maine Forest Service, their preferred hosts here in Maine are birch, quaking aspen, basswood and black locust. The eggs are laid in large batches, so clusters of early instars of 100 or more are not uncommon, and so occasionally they may defoliate an entire tree but in general do little harm to the forest.  As the caterpillars near full size, they begin to wander, and as a result–during years when their populations are especially high–people are even more likely to encounter them.

When the caterpillars are ready to spin their cocoons in the fall, they spin them using the leaf litter and their own hairs (as other tiger moths do as well). Thus, their cocoons are also capable of causing a rash whenever people come into contact with them, so as the Maine Forest Service points out, use caution when raking leaves following a season when the caterpillar population has been high. 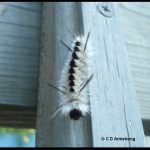 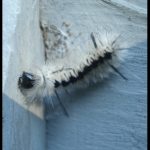