Many of Maine’s hornets, wasps and yellowjackets are members of the Vespidae family of insects. They are social insects capable of repeatedly stinging if they feel threatened or feel their nest is in danger. They can be a significant nuisance throughout Maine, particularly in mid to late summer when colonies reach peak numbers. The colony (nest) is started each spring by a single fertilized queen and continues to grow through the summer as more workers hatch.  Hornets, wasps and yellowjackets may be aerial or ground nest builders, producing grayish paper nests in trees, shrubs, and under building eaves. They may also nest in the ground, in logs, or in the walls of structures. They prey on caterpillars and other insects, though yellowjackets will also scavenge and are often attracted to sugary and high-protein foods in garbage containers. 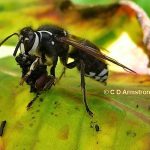 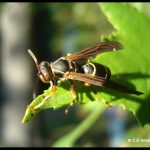 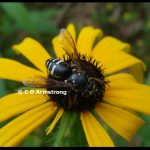 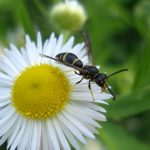 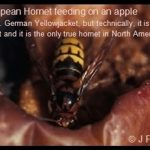 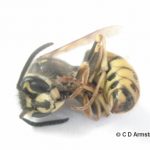 To reduce the risk of encountering yellowjackets and other stinging wasps, remove waste frequently and maintain tight lids on trash cans. If yellowjackets are present, avoid using perfumes and wearing bright colors, and keep food and drinks covered. Commercial traps can be effective for yellowjackets but are typically not attractive to bald-faced hornets or to paper wasps.  Hornet, wasp and yellowjacket nests should not be disturbed unless they pose a risk. Nuisance nests are most easily removed in early spring before the colony has had a chance to grow. Larger, well-established nests may pose enough of a risk to warrant treatment. Nests should be treated at night when the wasps are least active. Insecticide treatments should be sprayed directly into the nest entrance, whether it is above or below ground. If the nest is located inside a wall, the entrance should be located and treated but not plugged to ensure that the insecticide is carried into the nest and to avoid insects showing up inside the structure. Stings can be painful and potentially life-threatening to those with allergies. Be sure to wear protective clothing when treating and removing nests.