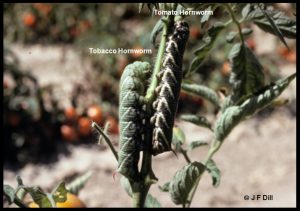 Hornworms are the caterpillars of a family of moths called sphinx moths or hawk moths (Sphingidae).  The caterpillars are so-named for the prominent horny spike that protrudes up from the end of the abdomen, and the hornworm caterpillar most likely to be seen in the home garden in Maine is the tobacco hornworm, Manduca sexta.   It feeds on the leaves and stems of primarily tomato in our part of the country but there are additional plants from the Solanaceae family that it will eat as well, such as eggplant, pepper, potato, and, of course, in the southern US, tobacco, for which it is named and for which it is very economically significant.  It is pale green in color (sometimes brown), and is a master of camouflage, allowing it to go largely unnoticed by human eyes until it is full size or close to full size (roughly three to four inches long). 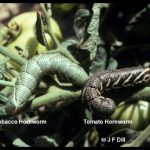 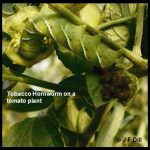 Tobacco Hornworm; one can differentiate it from a tomato hornworm by virtue of its seven straight white lines on its side 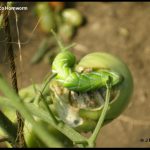 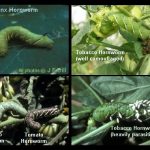 Collection of Hornworm Photos, including the Laurel Sphinx (USGS)