Horsehair worms–also known as Gordian worms–are, to say the least, rather mysterious creatures to anyone unfamiliar with them.  These thin, spaghetti-like worms can reach lengths upwards of 3 ft. and resemble the ‘hair’ of a horse’s tail or mane, and belong to a phylum called Nematomorpha because of their morphological resemblance to nematode roundworms.  The larvae of these peculiar worms are parasitic, but are harmless to humans, livestock, plants, and pets.  Their host organisms are commonly crickets and grasshoppers, but beetles, cockroaches, spiders, and some crustaceans can also be infested.

Horsehair worms–free living as adults–are considered beneficial, since crickets are such a common host.  Therefore, no control measures are needed if you find one of these interesting worms. 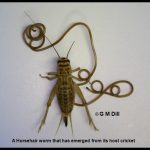 A Horsehair worm that has emerged from its host cricket 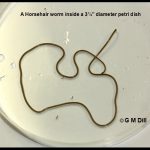