The scientific name for this peculiar-looking critter is Diprion similis and it was accidentally introduced to North America from Holland, with its first documented or recorded sighting on our continent having occurred in New Haven, Connecticut back in 1914. According to the Maine Forest Service (see source link below), this particular sawfly is most common on eastern white pine (its preferred host), but it may also be found on Austrian, Scotch, red, jack and Mugho pine as well. The one shown in the photo at right was found on a rose leaf, which it likely ended up on after falling or being wind-driven from a white pine that was overhead. Deck and porch railings, parked cars, and sides of buildings and homes are other common places the larvae are found after falling from their host trees.

Larvae feed on the needles of their host trees. Defoliation is usually most severe in the upper half of the trees, but entire trees can be defoliated if the populations are high. There are two generations per year of these larvae, with the first one occurring from late May or early June to early July, and the second generation occurring from late July through early September. The first-generation larvae feed on the previous year’s needles, whereas the second-generation larvae will feed on both the old needles as well as the new needles.

The larvae overwinter in cocoons as pre-pupae and then they pupate in early spring (early April).  In areas where pine trees are abundant, the larvae may inadvertently find their way indoors prior to making their cocoons.  Thus, newly-emerged adults may sometimes be found indoors in the spring. 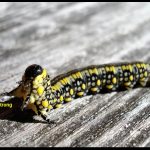 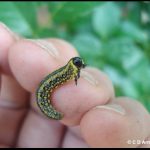 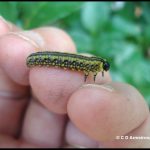 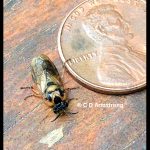