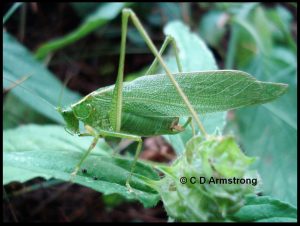 Katydids, or bush-crickets–though they resemble grasshoppers and are also known as long-horned grasshoppers–are actually more closely related to crickets than to any type of grasshopper.  They belong to a family called Tettigoniidae in the order Orthoptera, and get their common name based on the fact that people feel the mating call they make sounds like someone saying “Katy did, Katy didn’t, Katy did, Katy didn’t” over and over.  Many katydids are masters of camouflage and mimicry, often resembling the shapes and colors of leaves.

There are about 6,400 species of katydid worldwide (they have been found on every continent except Antarctica), but only 255 species are reported for North America, since most of the species have tropical habitats.  Katydids in this part of the world are primarily leaf-eaters, and we regard them as a “curiosity” in Maine because their populations are normally so low that it is extremely unlikely that any injury caused by them would result in a noticeable economic impact.