Lace bugs are very small members of the insect order Hemiptera (“true bugs” in the suborder Heteroptera) which comprise the family called Tingidae.  The majority of species are very host-specific and feed on plants exclusively as both adults and immatures (nymphs) alike.  They possess a needle-like ‘beak’ mouthpart that they use to pierce the leaf of the host plant, generally from the leaf’s underside, in order to suck out the chlorophyll and sap.  The loss of chlorophyll causes the upper surface of the leaves to appear stippled with tiny light-colored specks which over time merge together, turning the leaves yellow.  The feeding injury is unsightly and will diminish the plant’s vigor.  Severe infestations can cause premature leaf drop and even the death of small shrubs, but infestations on deciduous trees generally are not life-threatening to the tree.

The common name of ‘lace bug’ derives from the delicate and lace-like appearance of their wings and even their head and thorax when viewed from above.  The immatures (nymphs) are dark-colored,  usually with noticeable spines, and wingless at first.  The wings develop over time as the nymphs progress through a total of four to five developmental stages (instars) before becoming adults, a process that–depending on the species and the conditions–requires roughly 26 to 50 days from egg to adult.

Upon examination, when one suspects the presence of lace bugs or is monitoring for them, the lower leaf surface may reveal nymphs and/or adults, cast skins, and almost certainly numerous black-colored excrement if in fact lace bugs are present or have been present in noteworthy numbers.   One may also notice a somewhat bronzed or varnished appearance to the leaf’s underside due to the plant cells losing their contents.

As the sources below elucidate, lace bugs that feed on broad-leaved evergreens (azaleas and rhododendrons, for example) spend the winter as eggs (inserted into the midrib of the leaves).  However, those that feed on deciduous woody ornamental plants tend to overwinter as adults.  The overwintering stage (egg, nymph, or adult) is essentially species-specific.  An individual lace bug usually will complete its entire lifecycle on the same plant, even sometimes the same part of the plant.  Most lace bug species undergo one or two generations annually during the growing season. 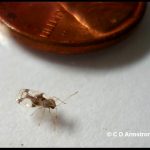 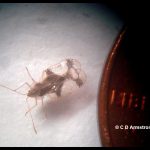 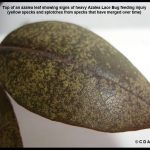 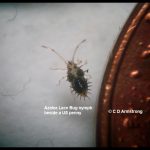 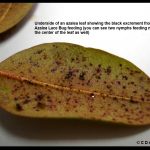 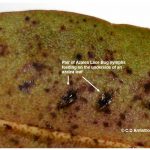 Closer view of the adjacent photo