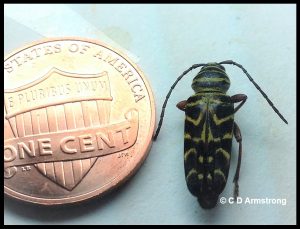 The Locust Borer (Megacyllene robiniae) is a type of long-horned beetle. Adults are about one-inch long with reddish legs, and feed a little on the pollen and nectar of goldenrod plants, upon which they are well camouflaged courtesy of the yellow and black bars they possess on their head, pronotum, and elytra (there is a distinctive “W” mark across their elytra/wing coverings). The black and yellow markings also bestow a fair amount of resemblance to a wasp or hornet, which likely affords them some protection from certain predators. There are two closely-related species: M. caryae and M. decora.  M. caryae is known as the Painted Hickory Borer.

Locust borer larvae are white and legless with a large prothorax, typical of long-horned beetle larvae.  The larval hosts of the Megacyllene genus seem to be restricted to plants in the Fabaceae family, commonly known as the legume, pea, or bean family.  Megacyllene robiniae (in its larval stage), is a serious pest of Robinia pseudoacacia, the black locust tree. The larvae damage the trees by creating numerous large tunnels in the branches while feeding on the sapwood.  These tunnels can eventually cause the branches to crack or break off, and they also disrupt the flow of nutrients and water within the tree, thereby inhibiting new growth. The tunnels also serve as infection sites for fungal spores, such as those belonging to the fungus, Phellinus robiniae, which causes a damaging heart rot disease in locust trees.  Larvae of M. caryae attack hickory, black walnut, butternut, osage orange, and mulberry.

Life Cycle: There is one generation per year. Eggs are laid singly in the fall inside deep pits within the bark which the female beetle carves out for the purpose. Eggs hatch in the spring and the larvae feed throughout the spring and summer with pupation occurring mostly in August. Adults begin to emerge during late August and throughout September.