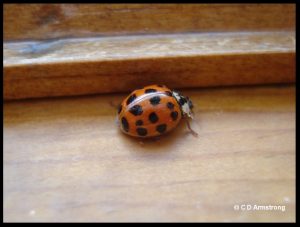 The Multicolored Asian Lady Beetle* (Harmonia axyridis), is a common ladybug that can become a household nuisance each fall in cold climates–in New England, for example–when adults begin seeking out warm locations to spend the winter.  It is inherently a beneficial insect, and one which has frequently been deliberately released in the U.S. (beginning as long ago as 1916) for the purpose of controlling harmful plant pests such as aphids, mites, scale insects, etc.  They can pose a legitimate nuisance, though, when confronted with large numbers of them indoors, and their secretions can stain furniture, curtains, blankets, rugs, etc.  They do not breed, lay eggs, or feed inside the home, however, and they are not structurally-damaging.

As the name suggests, the Multicolored Asian lady beetle exhibits a great many color forms.  However, outside its native area of eastern Asia, one finds them primarily showing only one of three basic color types: red or orange with black spots, black with four red spots, and black with two red spots.  The form with anywhere from zero to 19 spots–known as the succinea form—is the most common form that we have here in Maine.  They have reddish-brown legs and are noticeably brown on the underside of the abdomen. 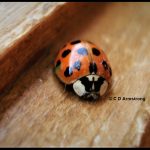 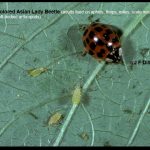 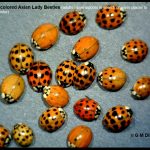 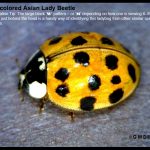 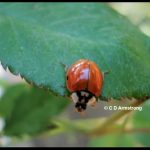