The Rice Weevil (Sitophilus oryzae) is a small snout beetle that has been known since early times.  It is a stored product pest which attacks several crops and products, including wheat, rice, corn, whole grains, millet, rye, beans, bird seed, and caked meal.  It is one of the worst pests of stored grain and is found in all parts of the world wherever grain is used.  It does particularly well in warm countries where it can breed continuously.  The adults live roughly four to five months and each female is capable of laying 300 to 400 eggs during her lifetime.  During hot weather, the weevils can progress through all of the life stages (egg, larva, pupa) in as few as 26 days, but taking longer in colder conditions and climates.

Two other weevils that greatly resemble the rice weevil are the granary weevil, Sitophilus granarius L., and the maize weevil, Sitophilus zeamaise.  The three species all differ only slightly in color and markings, making it challenging to identify one species from the other.  The rice weevil itself varies from reddish brown to nearly black and usually has four pale red or yellowish spots on its back.  Its thorax is also densely pitted with punctures that are somewhat irregular in shape, and running down the center of the thorax is a narrow strip that is much smoother in appearance compared to the rest of the thorax. 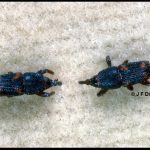 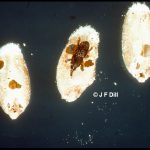 A rice weevil on a kernel of wheat 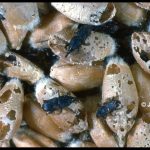 Rice weevils and their feeding damage to kernels of wheat