The term “sawyer beetles” refers to the genus of long-horned beetles known as Monochamus.  Two species one might encounter in Maine include the Whitespotted Sawyer beetle, Monochamus scutellatus, and the Northeastern Pine Sawyer, Monochamus notatus.  The larvae of these and other Monochamus beetles tunnel through the wood of various coniferous trees.

The Whitespotted Sawyer beetle is primarily a minor pest of coniferous trees, especially white pine, balsam fir, and species of spruce.  Other than some of the feeding done to the bark on the undersides of twigs by the adult beetles, it is regarded as a secondary pest because it is trees that are already weakened, dying or dead that the beetles utilize for  their larvae.  Size: Not counting the antennae, the whitespotted sawyer adults average one inch to an inch and a quarter in ‘body’ length which is notably smaller than the nearly two-inch long northeastern pine sawyer.

The Northeastern Pine Sawyer, besides being larger than the whitespotted sawyer, is not as dark in color and is described as being a drab shade of gray (see photos below).  Size: The northeastern pine sawyer adults are close to two inches in body length, and each antenna measures another two inches in the case of males and three inches in the case of females.  It is the largest long-horned beetle we have in our region of the hemisphere. 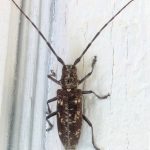 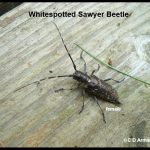 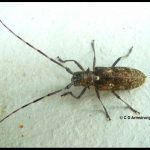 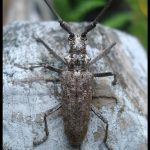 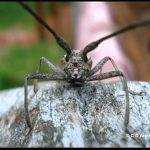 Many people mistake sawyer beetles for the dreaded Asian longhorned beetle (ALB). The ALB does not have the single distinctive white spot of the whitespotted sawyer, but instead has about 20 white spots on each wing cover.  The body of the ALB is also shiny and black, compared to our sawyer beetles.  Additionally, the antennae of the ALB are very conspicuously banded black and white. [What ALB Looks Like] (USDA)