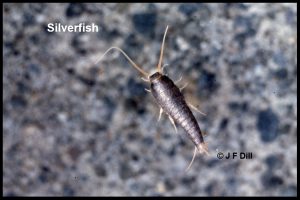 Silverfish (Lepisma saccharina) are rather unusual and shy insects (they hide during the day and are active at night) that most people know very little about. They are not associated with any diseases or with the spread of any diseases, but, their scaly, fish-like appearance, habits, and quickness does not win them any favors with most people who find them. One may find them in dark, cool (70° – 80° F) and moist environments in places such as basements, bathrooms, garages, closets, beds, pillows, attics, or just about anywhere cool and moist where there is also a reliable carbohydrate food source (anything with sugar and/or starch). They are regarded as primarily a nuisance (versus an economic pest), but, in the rare event that their numbers become high, they can cause damage to “paper, book bindings, wallpaper, cereals, starched fabrics, leather, fur, silk and rayon.”  Silverfish females usually lay fewer than 100 eggs in their lifetime, and, amazingly, the lifespan of a silverfish can last from two to as many as eight years! 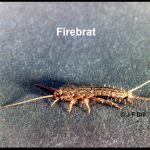 Firebrats (Thermobia domestica, sometimes listed as Thermophila furnorum) are very similar to silverfish in appearance and habit (both are in the order Thysanura), but one key difference is that firebrats prefer higher temperatures (90° F and higher) and so you can find them in some places where you would not likely find silverfish, such as bakeries, and places near or around boilers or furnaces, heat vents, hot-water tanks/pipes and such. But, like silverfish, they like humid conditions and share similar food sources, feeding on a wide variety of carbohydrates and starches, but items which may also include protein such as dog & cat food, and flour, for example. They can be found throughout most regions of the world and are normally found in warm places outdoors (for example, under rocks, leaf litter, etc.), but, they are frequently found indoors as well. They are primarily a nuisance, as is the case with silverfish, as they do not cause major damage, but they can contaminate food, damage papers and/or books, and stain clothing with their feces. Otherwise they are mostly harmless and, like silverfish, are not associated with any diseases.