Springtails (Collembola) are peculiar, but harmless, creatures, that people may recognize by another common name–Snowfleas or ‘snow fleas’–used to describe some dark-colored and jumping species, such as Hypogastrura nivicola.  Snowfleas are easy to see when they end up in large aggregations on top of snow-covered areas in late winter or early spring.  Most species of Collembola possess a special forked appendage called a furcula that enables them to jump, which is the reason for the vernacular name, springtails.

Springtails are very minute in size; commonly 1/8th to as small as 1/16th inch in length.  Most are either dark-colored, brown, grey or black but some species are white, or even iridescent and brightly colored such as the red species that are pictured here. Springtails require damp conditions to survive, and may be found in a large number of habitats, especially soil.  Other habitats include leaf litter, rotting wood, caves, shorelines, organic debris, under bark, or even indoors in moist locations such as the soil of potted plants.  People may also find them in their basements, or outside covering portions of foundations.

Springtails are considered beneficial because of their important role as decomposers, since they are omnivore feeders that will feed on fungi, pollen, algae, and decaying animal and plant organic matter. 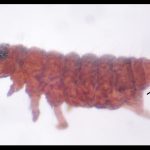 Closeup image of a Sprintail 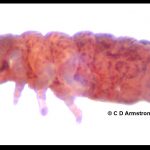 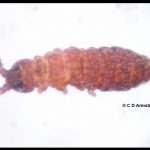 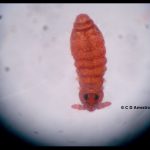 Springtails collected from a cranberry bog 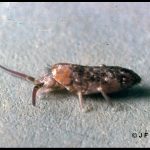 Closeup of a Springtail

Other Notes of interest: