Water scorpions belong to a family of aquatic predatory insects known as Nepidae.  There are two genera of water scorpions in the northeast and Maine.  Those in the genus Ranatra (such as the one pictured here) are thin-bodied and much more common than those in the other genus, Nepa, whose members are fat-bodied and look very much like a Giant water bug.  Although the name sounds very menacing, due to the family’s outward superficial resemblance to a scorpion, members of the Ranatra genus are said to be docile and quite safe to handle, unlike a giant water bug which can inflict a very painful bite.  Ranatra water scorpions are also sometimes called needle bugs or water stick insects due to how slender they are, and people sometimes confuse them for some type of walking stick.  The long tail is not used for stinging, but instead, for breathing. 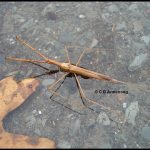 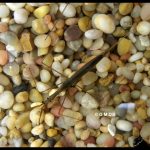 Water scorpions are typically found lurking motionless near the surface of still water–ponds in particular–or slow moving sections of rivers and streams clinging to twigs or pond vegetation, head down, waiting to ambush their prey.  They feed primarily on other invertebrates (insects, spiders, worms, etc.), but will sometimes successfully capture and eat small fish or tadpoles.  They use their specially adapted forelegs to grasp their unsuspecting prey, and their piercing-sucking mouthparts to impale and ingest the fluid of their victims.  Their saliva contains enzymes that sedate and partially digest their prey.

Water scorpions can swim for short distances but seldom do so unless they are disturbed, as they are not very speedy swimmers, relying on an alternating oar-like movement of their second and third pairs of legs to slowly propel them along; they are built much more for camouflage than they are for swimming. Their eggs are deposited above the waterline in various vegetation during the springtime, and hatch anywhere from two to four weeks.  The resulting nymphs take about two months to mature.  When fully grown,  Ranatra members measure about 2 inches in length, from the tip of their tail-like breathing tube, to their head.