The White Pine Sawfly, (Neodiprion pinetum), is a pest in its larval form that feeds primarily on Eastern white pine but is known to also attack red, Mugo, and other short-needled pines.  Larvae feed gregariously on both the old and the new needles, beginning in late spring.  Newborn larvae tend to consume only the outer part of a needle, but older larvae will eat the entire needle.  Feeding is heaviest from summer through early fall (July through early September).

Larvae spend the winter as a prepupa, with pupation completing in the spring and the adults emerging several weeks later.  The eggs are deposited into tiny slits that are cut into the needles by the sawlike ovipositor that the females possess.  Interestingly, a female can produce male offspring from unfertilized eggs, but in order to produce female offspring, successful mating is required. 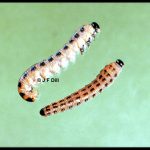 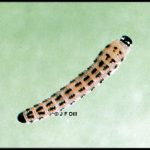