Earth Dharma Farm ME — Stale Seedbedding with Tillage and Tarps

One piece was cut too short, leaving 8 bed feet untarped. Despite flame weeding that untarped section 3 times, the tarped section was significantly less weedy. The next year Dave went all in.

He has effectively controlled “12 of his 14 weed species” with tarps. That means that he still has issues with crabgrass and lambsquarters. So, while tarping has significantly reduced weeding labor needs, and helped improve soil health, it isn’t a complete silver bullet. It requires a different level of management.

Tarps hold beds between crops, help residue decay, and also cover beds that have gotten real weedy that they can’t deal with at the time.

In fields that have been tarped the longest (3 years) they are finding that broadforking is not necessary as things are loosening up. They note that the “soil is a pleasure to work in” and less physically challenging to work.

The main reason Edible Uprising does bed prep and tarps in the fall is to relieve the spring workload. Prepping beds in the spring was a huge workload and doing as much as possible in the fall helps.

Standardized sizes are really important, making sure that tarps fit your blocks and beds. Make sure to always include a little extra length to account for the raised beds and overhang for sandbags and securing.

Three 20” wavy coulters are pulled through the residue to mark rows and loosen a slot to plant, and fall brassica and cucurbit transplants are put in.

The uniform dimensions of their plots allow for easier rotation and eliminate the need to sift through different sized tarps.

They have seen big improvements to soil structure from their amendment additions as well as the big reduction in tillage. On sloping soil, it is highly advantageous to have a cropping system that reduces tillage and can accommodate very high levels of residue on the soil surface.

Tarps are now used as a central component of the soil health plan on the farm. Tarps are utilized between plantings of salad greens to disrupt weed and crop growth, as well as to terminate cover crops, without disturbing soil.

Daniel prefers to knock down the cover crop to get the tarp closer to the soil. To accomplish this, he has developed a human powered “walker crimper” by tying ropes to either end of a t-post….” The crew “step(s) on the post in unison with each step, in effect knocking and crimping the cover crop.

[With landscape fabric] it’s important to know that you can’t just cut this stuff with a knife or scissors, it becomes confetti — you need to melt it.

One major failure was trying to mulch over the landscape fabric. They attempted this because they didn’t like the aesthetics of the plastic, but it just invited the quackgrass to move in and created a mess.

Links are provided purely for educational purposes. No responsibility is assumed for any content on the linked sites. 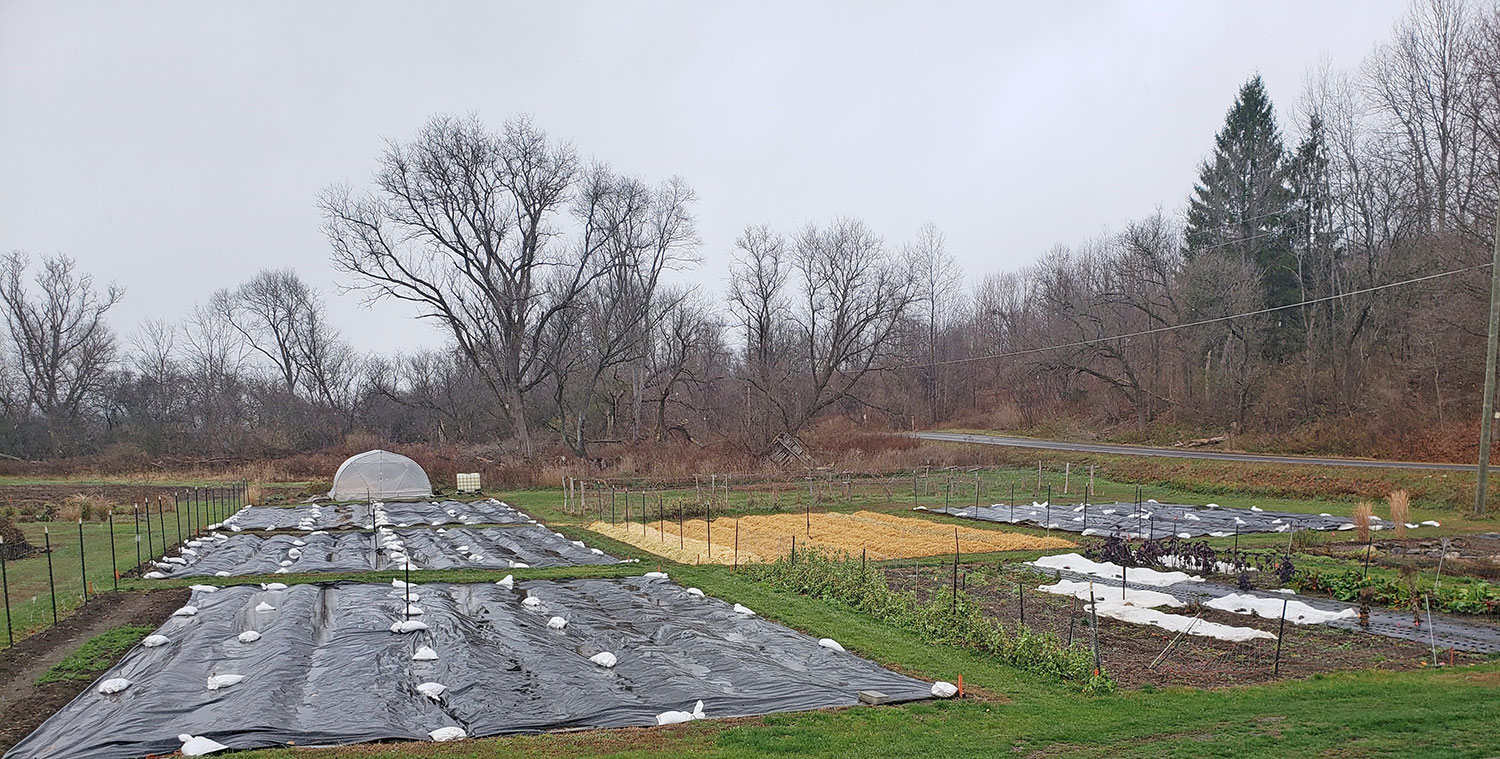 Bulletin #1075, Tarping in the Northeast: A Guide for Small Farms

For information about UMaine Extension programs and resources, visit extension.umaine.edu.

Find more of our publications and books at extension.umaine.edu/publications.