A tree of many uses

Balsam fir is a conifer tree species of significant economic importance in Maine, and its products have many applications. Primary uses for the mature tree and its wood are for dimensional lumber, such as two-by-fours, and for pulp in papermaking. But balsam fir has many non-timber uses that enable landowners, and those with access to the resource, to derive additional benefit from the tree before it reaches timber or pulp-harvesting size.

Although there are no firm figures on the production of balsam fir wreaths and other seasonal decorations in Maine, it is known that many hundreds of people are employed in wholesale and retail balsam fir decoration businesses in Maine. Current estimates place the value of non-timber balsam fir products in Maine at $25 million. Maine fir products are shipped all over the country, and Maine wreaths are even used at Arlington National Cemetery to honor those who have served in the United States Armed Forces. The manufacture of balsam fir products is a good example of a cottage industry that requires little in start-up costs, although a good business and marketing plan may still be necessary for success. (For more information see Bulletin #3005, Your Business Plan, A Fact Sheet for Small-Scale Business Owners.

Balsam fir leaves, or needles, are flattened and measure from one-half to one inch long. Sometimes they are finely notched at the tip. Mature needles are dark green and shiny on the top and have two parallel stripes on the underside running the length of the leaf. The needles grow primarily from the sides of the twigs, which appear flattened in the shade, and appear more fully rounded when growing in full sun. 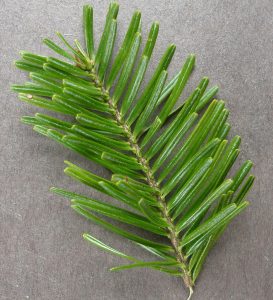 Shiny, dark green needles grow from the sides of the twigs in two single rows on either side of the branches. Photo by D. Fuller. 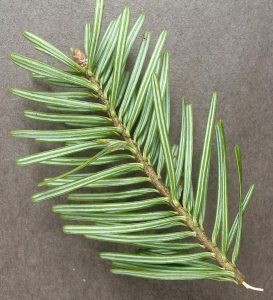 Look for parallel stripes on the underside of the needles. Photo by D. Fuller.

The bark of balsam fir is gray, relatively smooth, and has pitch or resin blisters containing a thick, very fragrant resin. The bark of older trees sometimes lacks blisters and can take on a rough appearance.

Cones are found in the tops of balsam fir trees. The dark purple (maturing brown) cones are borne upright and measure from two to four inches long. Mature cones fall apart while still on the tree — the winged seed falls either with the cone scales or alone and is spread by the wind.

Balsam fir is a relatively short-lived tree, growing to 60 to 70 feet in height and 12 to 20 inches in diameter.

Balsam fir can be found throughout Maine, but it is more heavily concentrated in Washington County, where many of Maine’s larger wreath businesses are located, as well as in northern Maine

Maine balsam fir products are currently marketed through the Internet, mail-order catalogs, in gift shops, at farmer’s markets, through craft fairs, and at roadside stands. They are also sold wholesale. In recent years, holiday decorations made from West-Coast evergreens have appeared in markets in Maine, but they lack the distinctive and long-lasting fragrance of balsam fir.

The market price of balsam fir increases dramatically with the degree that value is added. For example, the four pounds of balsam fir brush needed to make a 24-inch diameter wreath sells wholesale for about $2, while that finished, undecorated wreath sells for $6 to $8. The same wreath, decorated, can retail from $12 to $30 or more, depending on the degree and quality of decorations used.

For more information on balsam fir wreaths and sustainable harvest of balsam fir, see the following bulletins from the University of Maine Cooperative Extension:

Special thanks to our reviewers: