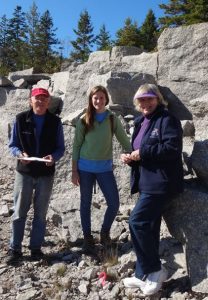 Natasha Krell’s introduction to phenology research began out west. At the University of Arizona, Krell worked under the direction of Dr. Shirley Papuga to investigate the relationship between available water resources and plant response. The researchers gathered data on the flowering times and overall greenness of an important desert species, creosote bush (Larrea tridentata), through the use of Phenocams, a type of game camera designed to view phenological activity.

Following this summer project, Krell returned to College of the Atlantic where she is a member of the class of 2016. “I came back to Maine and was working with one of my professors here on how to build my research skills and also stay in line with what I had learned over the summer. We came up with this local adaptation project.”

The local project, designed with professor Dr. Nishanta Rajakaruna, is more focused in scale and involves two species on Deer Isle, yarrow (Achillea millefolium) and St. John’s wort (Hypericum perforatum). According to Krell, “we’re looking at both how climate affects phenology and local adaptation to soil type.” Individual plants have been selected from locations with two different soil types, granitic and serpentine.

“Serpentine is a pretty harsh environment for vegetation,” said Krell. Soils formed from serpentine rock can be challenging for plants due to a high heavy metal content that can stunt growth. Additionally, serpentine soils are low in needed calcium and high in magnesium, which may restrict the uptake of what little calcium is available. In addition to observing flowering times, leaf color change, and leaf drop in the field, Krell has planted seeds from each site into their own and the opposite soil type in a greenhouse setting. This growth chamber experiment will use fresh seed mass and the total number of blooms as a measure of the plants’ success in each soil type. Krell hypothesizes that in the growth chamber experiment, if the seeds taken from serpentine plants perform better in their native soil than the foreign and less challenging granitic soil, then it is “a sign that they are locally adapted” to grow in serpentine soils.

One goal of the study is to determine the extent to which phenology can be influenced by environmental conditions. Significant differences in bloom times between the two soil types could isolate populations, preventing a species from reproducing with members that produce flowers at different times. Thus far, reproductive isolation has not been noted on Deer Isle.

Although there are no defined plans to continue the project, future student researchers will benefit from the established methods and also from a small group of citizen scientists that have been assisting with data collection. Frequent, reliable observations are important for phenology research. “I’ve really appreciated all the citizen scientists that I’ve worked with. Being a student, it’s a huge learning experience to have locals on the ground who have knowledge of the area and of the species… that local knowledge is crucial.”