Prepared by Judith A. Collins, Assistant Scientist and Francis A. Drummond, Professor of Entomology and in cooperation with David Yarborough, Extension Blueberry Specialist, The University of Maine, Orono, ME 04469. February 2017.

Blueberry tip midge (Dasineura oxycoccana Johnson: Diptera: Cecidomyiidae), is also referred to as blueberry gall midge or cranberry tipworm. In the 1990s this insect became a major pest of all types of blueberries grown in the southern United States and then spread northward to infest blueberries and cranberries in all of North America.  It was first detected in Maine in 2004. There has been some confusion as to whether tip midge and cranberry tipworm are the same species, but recent evidence indicates that they are not. The unique biology of the wild blueberry plant and the complex nature of the damage caused by this insect make assessing the impact on blueberry production difficult.

Adult tip midge (Figure 1) are small, long-legged, mosquito-like flies < 1/16 inch in length and smaller than most other types of midges commonly found in wild blueberry fields. Adult midges live for only a one to two days and spend most of their time within the crop canopy.

Colorless, oblong eggs are laid within leaf buds of rapidly growing blueberry sprouts and quickly pass through three distinct instars or growth stages changing in color from clear to white to light orange (Figure 2). Typically, there is three or four larvae (maggots) present within a leaf gall but occasionally more are found. The last instar drops to the ground and pupates near the soil surface. On wild blueberry, pupation does not occur within the leaf gall as occurs in cranberry. 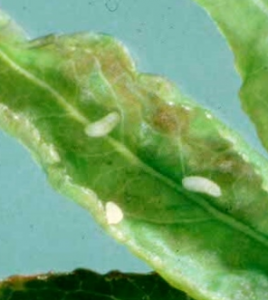 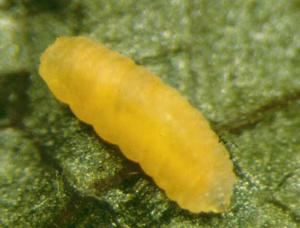 The biology of tip midge on lowbush blueberry is not well understood. Adult females emerge in the spring, mate and deposit eggs in the terminal shoots of new growth. The eggs generally hatch within three days and the developing larvae (maggots) feed on new blueberry growth for 10 days to two weeks.  Mature maggots drop to the ground and form silk-encased pupae. Depending on the temperature, adults emerge within five to ten days. Total development time from egg hatch to adult is usually only two to three weeks.  At this time, it is unclear if there are multiple generations of this pest in Maine lowbush blueberry, but it appears that attack of terminal shoots is completed by mid to late June.

Maggot feeding on developing young shoot tips causes the leaves to form dimpled green curls (Figure 3). The leaves sometimes take on a light red coloring and can be easily confused with thrips damage (Figure 4).  However, thrips curls are generally much darker red in color and leaves are more tightly wound together often encompassing the entire stem, and the leaf curls generally have a smooth surface.  Galls associated with tip midge are generally only on the terminal ends of the stems.  Within the gall the growing point and small leaves turn dark brown and die. In many cases the plant responds to tip damage by increasing growth at other buds, resulting in excessive branching.  First gall formation generally occurs in late May or early June.  Although leaf galls can be seen in fruit-bearing fields, they are much more prevalent in pruned fields. 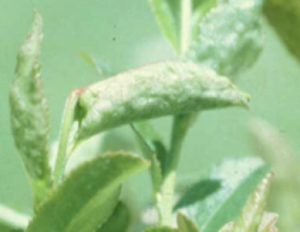 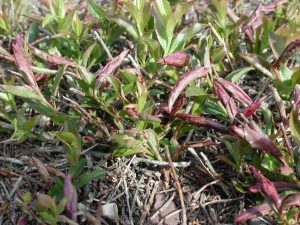 This pest is known to cause economic losses in highbush blueberry in the southeastern United States. The results from our research in Maine suggest that tip midge can be damaging and that potential yield loss can be as high as 50% on any one infested stem. We found that in four of five years, infestations resulted in 30-50% flower loss while in the other year there was no significant loss of flowers.  However, because stem infestation rate (or the number of infested stems in a field) is usually less than 5%, there is no evidence that control of blueberry tip midge is a justified expense in most cases. We stress MOST cases because we have observed a few wild blueberry fields that have a considerable field-wide infestation.

Additional research is needed to determine if or when control of blueberry tip midge is warranted. Insecticide applications are the main tactic used to manage the blueberry gall midge; however, their effectiveness is limited because the maggots are protected in the leaf curls. We have discovered that insecticide applications initially reduce the tip midge attack and infestation, but that by late June there is no difference in tip midge leaf curls with the control because most of the curls in non-sprayed areas disappear by late June and so there is no difference between sprayed and non-sprayed areas. Therefore, we currently have no recommendations for insecticidal control of this pest.  A late burn (mid to late June) after most of the galls have formed can suppress populations, but will also reduce flower bud cluster production during the prune year. We recommended that growers monitor their fields for an infestation of blueberry tip midge. Stems in pruned fields should be examined for symptoms (blackened tips, curled leaves around tips, and excessive side branches. A sample of stem tips should be carefully opened and examined with a hand to confirm the presence of maggots.