The Asiatic Garden Beetle [Maladera castanea (Arrow)] is a pest that was first found in the United States in New Jersey, in 1922, having been introduced from its native China and Japan. The overwintering grubs live in the soil and feed on the roots of grasses and weeds early in the spring.  The adult beetles, which are cinnamon-brown in color, are smaller than the more familiar May/June beetles (only about the size and shape of a coffee bean).  The beetles–which feed mostly at night–are known to feed on more than 100 species of plants, from vegetables, herbs, fruits, trees and shrubs, to garden flowers including asters, dahlias, mums and roses.  They are also attracted to lights at night, just like their larger relatives.  Grubs pupate in May and June and emerge as adults from late June through early July but adults can still be found here and there well beyond that period until cold temperatures set in. 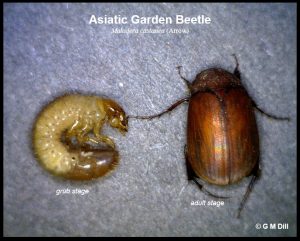 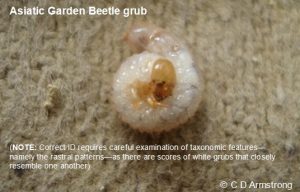