Bark beetles are fairly small insects, between 1/8 and 1/3 inch long, named for the fact that the best known species reproduce in the inner bark of trees.  It is a very large group, with approximately 220 genera.  Most species of bark beetles live in wood that is already dead, dying or at least weakened due to such things as drought, disease, root damage, smog, etc., and these play an important role in the decomposition of wood and in helping to renew forests by killing older and/or weakened trees.  However, there are some species, such as the Mountain Pine Beetle (Dendroctonus ponderosae) that attack and kill live trees.  Species of that sort are economically significant and are considered important pests, particularly for the lumber industry. Trees do produce some natural defenses against bark beetles, such as resin or latex–which can contain any number of insecticidal compounds that can kill or harm the beetles or even just trap and suffocate them with the sticky nature of the compounds–but when there is a full-blown outbreak of any of the pest species that attack living trees, a tree’s defenses can be overwhelmed by the sheer number of them. 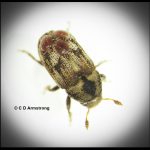 Eastern Ash Bark Beetle (Hylesinus aculeatus) (July 21st, 2021; from firewood in Pittsfield, Maine) (with three phoretic mites hitching a ride on its back) 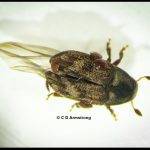 Eastern Ash Bark Beetle (Hylesinus aculeatus) (July 21st, 2021; from firewood in Pittsfield, Maine) (with five phoretic mites hitching a ride on its back) 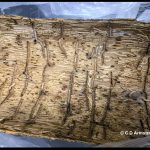 Interior portion of ash bark showing the tunneling and brood chambers carved out by Eastern Ash Bark beetles (The egg galleries run perpendicular to the tree’s branch and/or trunk) (Easton, ME; 3/10/2022) 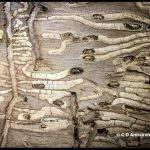 Closer view of the ash bark in the adjacent photo showing the tunneling and brood chambers carved out by Eastern Ash Bark beetles (Some of the beetles can be seen inside the chambers, such as the one in the very center of the photo) (Easton, ME; 3/10/2022)