Cockroaches generally have a flattened, oval appearance, long spiny legs and long antennae. Color, which depends on species and age, ranges from a reddish brown to dark brown and from tan to black. The German cockroach (pictured at right) is by far the most likely species to infest homes in Maine. It is about 1/2-inch long, light brown, with two lengthwise black stripes on the shield behind its head. The adults are fully winged, but rarely fly. The nymphs resemble the adults but are smaller, darker and wingless.

Although cockroaches carry disease organisms, they are not known to transmit disease to humans. They do contaminate food and kitchen utensils with excrement and salivary secretions, leaving an unpleasant odor.

There is also a cockroach in Maine that lives outdoors in wooded/forested habitats that is very common in Maine and the Northeast, called the Pennsylvania Wood Cockroach or sometimes just “Wood Roach,” for short.  They can be a nuisance, however, when they end up indoors as “accidental invaders,” which happens especially during the summer months in Maine.  Males have functional wings so tend to be encountered by people more often compared to the females. 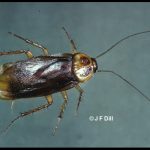 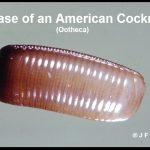 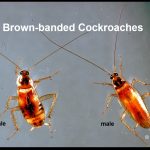 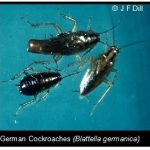 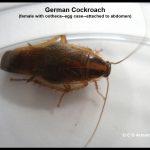 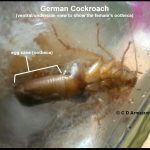