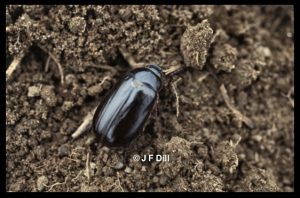 May beetles and June beetles–or June bugs–are common names given to beetles that are in the genus, Phyllophaga, which is a very large genus of scarab beetles comprised of more than 260 species with upwards of 100 occurring in North America. They are stout-bodied (1/2 to one inch or more in length), and range in color from light tan to reddish-brown or even black like the one shown here. Since the beetles are nocturnal, they are readily attracted to lights so are often seen and heard buzzing around (and thumping into) porch lights and window screens on warm summer nights.

Adults, which emerge in May and June, feed on the foliage of various trees and shrubs.  On oaks and maples in particular, feeding injury is usually insignificant, giving rise to small irregular holes in the leaves that are often not noticed until the leaves have finished expanding, by which time the beetles have likely long since moved on.  Thus, steps to control the adults are rarely necessary or warranted.

When these insects are in their grub/larval stage, the feeding that is done to plant roots can on occasion be severe, most commonly for grass/turf roots.  Only rarely is it a problem in ornamentals. Some species feed in the C-shaped white grub stage (on roots and organic matter) for several summers before pupating, whereas a few species complete their development in just a single season, forming adults in the fall that remain dormant in the ground and do not emerge until the following May or June.