The Mexican Bean Beetle, Epilachna varivestis, is one of two species of ladybug (or ladybird beetle) that is a common pest of vegetables; the other being the Squash Beetle, also known as the squash lady beetle.  The two pests have such similar coloration and spot-patterning that people often confuse them with one another.  However, the Mexican bean beetle feeds almost exclusively on legumes, while the squash beetle prefers cucurbits.  Bean is the preferred host of the Mexican bean beetle, and includes most varieties of snap beans and lima beans, with snap beans (especially the group called wax beans) being preferred a bit more than lima beans.  Mexican bean beetles are about the same size as an average ladybug, whereas squash beetles are nearly double that size.  There is a slight color difference as well, with mature Mexican bean beetles having a coppery appearance compared to the more yellow or somewhat orange coloration of squash beetles.

Host plants are damaged by both the larvae as well as the adults, and in fact the larvae cause more damage than do the adult beetles.  Both larvae and adults will feed upon the leaves, flowers, and the pods of beans, but it’s the leaves that suffer the most injury, producing a lace-like, skeletonized appearance (larvae feed on the undersides of the leaves, stems or pods).  Sometimes blossoms and small pods will be completely destroyed. 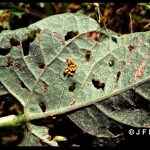 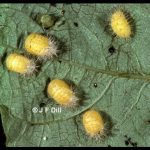 Mexican Bean Beetle pupae on the underside of a bean leaf, with a single mature larva in the top-right portion of the image (larvae feed on the leaf undersides) 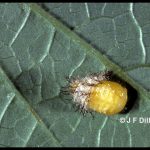 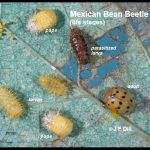 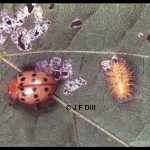 The adult beetles have eight black spots on each wing cover (elytra) which become less conspicuous as the beetles age and darken into their more copper-like or bronze body color versus the paler color tones that younger adults exhibit.  Adults overwinter in moist locations under brush or leaves, and most of them emerge from their dormant state once the weather warms sufficiently.  Some, however, don’t lose their dormancy until mid-summer.  After feeding for a few weeks, mated females lay their eggs, which hatch in a week or two, in accordance with temperatures (only a week is required in warmer weather).  As is the case with squash beetles, the eggs are generally deposited on the undersides of the leaves, but specifically bean leaves in the case of the Mexican bean beetle, and the clusters will often have more eggs in them (from 40 to 75) compared to the approximately 45 per cluster for squash beetles.  Larvae feed for two to five weeks, depending again on how warm the temperatures are during that period.  The larvae pupate on the plants, and emerge as adults generally from five to ten days later, on average, unless it is unusually cold during that time which consequently drags out the length of the pupation period considerably.

The adult beetles are strong flyers, so can travel long distances in search of other legumes to infest.