The Squash Beetle, or Squash Lady Beetle, Epilachna borealis, is a type of ladybug/ladybird beetle that is a common vegetable pest in the eastern US which has a strong preference for cucurbits.  “Cucurbits” are defined as plants of the gourd or squash family (Cucurbitaceae), which includes melons, pumpkins, squash, and cucumbers.  There is a second ladybird beetle–the Mexican Bean Beetle–that is also a pest of vegetables, and superficially looks a great deal like a squash beetle both as an adult and as a larva, but squash beetles are about double the size of both a typical ladybug as well as a Mexican bean beetle, and the latter prefer almost exclusively legumes as opposed to the cucurbits that squash beetles prefer.  Also, squash beetles are yellow or orange, whereas Mexican bean beetles have a copper color to them. 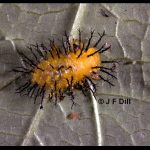 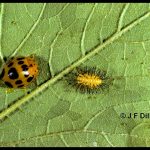 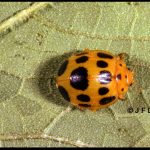 Squash beetle larvae (which are yellow with six rows of barbed, black spines) feed only on the underside of leaves, whereas the adults may feed on either leaf surface or even on the skin of the vegetable itself, leaving behind a spiral-shaped path of feeding/scarring injury.  Late in the season, large numbers of the beetles may be found feeding on the outside/rind of the ‘fruits,’ such as pumpkins or squashes, for example.

Life Cycle Summary: After overwintering near field edges, adults move back onto the cucurbit crops in late June to feed. Eggs are laid in July, generally on the undersides of the cucurbit leaves in somewhat loose individual clusters of around 45 (and up to as many as 400 total per mated female), and larvae develop through a total of four instar stages over the subsequent three to four weeks before pupating on the leaf undersides.  By late August, the new generation of adults emerge and feed for another week or two before leaving to find a suitable overwintering site on the edge of the field.