The Japanese beetle, Popillia japonica, is a scarab beetle about 3/8“ long.  The head and thorax are metallic green and the elytra (outer wing covers) are copper-colored.  Adult feeding damage appears as lacy leaves, as in the photos below.  The beetles feed on over 400 plants including rose, raspberry, bean, grape and blueberry. The adults are good fliers and can move from one area to another in large swarms. When threatened, adults will feign death, dropping from the plant.

The larval stage is a C-shaped white grub similar in appearance to the June beetle, rose chafer and European chafer.  Japanese beetle grubs can be a major turf pest.  A good indicator of a white grub infestation is skunks digging up the lawn. White grub treatment threshold is typically 8-10 grubs per square foot. 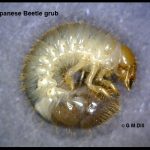 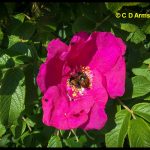 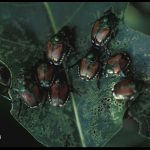 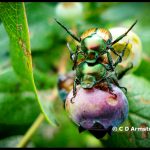 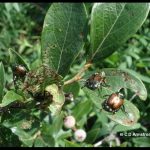 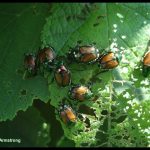 A cluster of Japanese Beetles 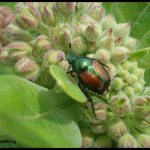 Japanese Beetle on a milkweed plant 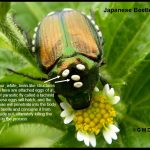 Japanese Beetle with four eggs from a parasitic fly called a tachinid fly. Leaving such beetles alone is advisable because it may lead to additional tachinid flies that can go on to parasitize additional beetles (such parasitism typically kills the beetle). 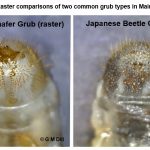 Comparing the rasters of Japanese Beetle and European Chafer grubs.

Additional Information (includes ‘Life Cycle’ and ‘Management’): Japanese Beetles — see also the following video about things you can do to help control them: