UMaine Extension is one of three cosponsors of the 2019 Universities Fighting World Hunger Summit. The Maine Hunger Dialogue is scheduled to return in 2020.

Universities Fighting World Hunger (UFWH) is a coalition of institutions of higher education dedicated to educating students in all disciplines about the causes of hunger and to training and encouraging them to take effective action, both at home and abroad. UFWH began as a partnership between Auburn University and the United Nation’s World Food Program. Since its inception in 2006, the coalition has come to include students on 300 campuses and has brought over 100 university presidents from 29 countries together as signatories to PUSH (Presidents United to Solve Hunger).

Fighting Hunger in a World of Plenty: Shifting Power and Taking Action 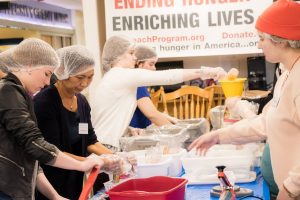 Food waste and recovery was the focus of the 4th Annual Maine Hunger Dialogue at the University of Maine at Presque Isle, Oct. 20-21, 2017. Bringing the Maine Hunger Dialogue to the crown of Maine and the heart of potato country was an impactful experience for students and staff coming from central, eastern, and southern Maine, many of whom may had never been exposed to the life and culture of this beautiful northern part of the state.

Maine Hunger Dialogue partnered with the Campus Kitchens Project, whose 60 chapters across the U.S. have recovered over 6.5 million pounds of food, and prepared and delivered over 3 million meals to needy students and community citizens. Before the two-day event ended at the University of Maine at Presque Isle, about 150 students and staff from 20 universities and colleges statewide packed 10,000 nutritious, nonperishable meals for Maine food pantries.

Delivering the keynote address was noted author and hunger activist Joel Berg, speaking on “Why the U.S. Has Hunger and How We Can End It (Really).” Other speakers included Alex Moore, author and “hunger warrior” with DC Central Kitchen and Campus Kitchens Project; Scarion Rupia, sustainable agriculture professional from Tanzania, and Dixie Shaw, hunger activist with Catholic Charities of Maine.

Dialogue participants were connected with resources to benefit Mainers who are among the 48 million Americans Feeding America estimates are living in food insecure households.

In the first three Maine Hunger Dialogues at UMaine, 340 faculty and students from 20 college campuses and one high school committed to action plans to address hunger in their respective communities. Twenty-nine campus teams were awarded $500 grants for hunger-alleviation projects that were used to establish or maintain campus food pantries, as well as plant campus-based community gardens to produce fresh vegetables for local food pantries and for students with low incomes. Other projects created campus food recovery networks to redirect cafeteria surplus to local food security organizations, as well as promoted campus hunger awareness and student engagement activities, and organized fundraisers that resulted in $2,500 for the Mid-Coast Hunger Prevention Program.

“By focusing on campuses and surrounding communities across the state, students can make a real difference in people’s lives, as well as gain career skills, raise awareness of and work toward ending food insecurity in Maine,” says Wertheim. “Next year, we’ll come back together to share and develop new projects and continue to elevate the effort to reduce insecurity among our families, neighbors and friends.”

Lisa Morin, coordinator of UMaine’s Bodwell Center for Service and Volunteerism, says she’s excited about the support received, which has allowed the event to continue for a fourth year. “These students want to make a difference and the Maine Hunger Dialogue is helping them to achieve sustainable change,” she says.

University of Maine Cooperative Extension, in partnership with Maine Campus Compact and citizen volunteers, hosted the 2014 and 2015 Maine Hunger Dialogues at UMaine. The 2016 event was held at the University of Maine at Augusta.