May 2015: Avoiding Avian Influenza (AI) in the Northeast US 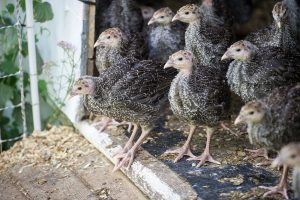 It’s easy to know whether to worry about highly pathogenic diseases that may blow in with the breeze and may wipe out your flock (either because the disease is quite virulent, or because regulatory agencies need to “stamp out” flocks that have the disease): yes, you should worry. However, the essence of survival in our modern world is risk assessment. All farmers should be trying to assess what kind of risk AI may pose to their operation, and what are the responsible and cost-effective steps they can take to minimize that risk.

During 2014 and 2015, we have seen highly pathogenic avian influenza (HPAI) cases starting on the West coast of the US, and later in the Midwest. The situation changes week to week; to follow the changing pattern, please see the USDA updates.

It’s not known for certain, but it looks like wild birds are a “reservoir” for this disease, and may carry it without necessarily becoming ill. Poultry, however, are severely affected, and turkeys appear to be very sensitive. The current (early April 2015) tally of reported cases, along with type of farm and location, indicates that 9 US states are affected, with 8 of the 19 infected flocks consisting of commercial turkeys, and the only other commercial flock consisting of a mixed group of chickens and ducks. However, 10 of the affected flocks were backyard flocks, mostly with mixed species of poultry. In all, over 500,000 US birds have been depopulated so far. A very recent report stated that HPAI has been found in an Ontario commercial meat turkey farm; one of four barns had 75% mortality at 16 weeks of age.

Farms in Minnesota and Iowa: Spread?

According to University of Maine Professor Emeritus Mike Opitz (regarding the recent reports of HPAI on Iowa layer farms), “With this amount of poultry infected there will be a lot of AIV aerosolized, bound to dust and feathers and the virus can carried for miles.” He suggests that movement of chickens on trucks could strongly contribute to the spread of AI. If crate and truck washing was required, such as with the truck washing stations on the interstate during the AI outbreak in Pennsylvania during the 1980s, it might reduce spread and protect both our backyard and our commercial producers.

Is this a risk to us in the Northeast? Wild bird migration patterns pass through our area, although we are somewhat distinct from the western and central (Midwest) flyways. These paths have some potential for birds “crossing paths” in the southern and northern extremes of the migratory pathways. Wild birds may carry avian influenza viruses, and not be extremely affected by them; but poultry tend to be very susceptible. Avoiding contact between wild birds and your birds is the best course of action. How can you accomplish this goal?

We strongly recommend that all producers, especially turkey producers, pay attention to biosecurity and especially to reducing contact with wild bird fecal material. The AI virus can persist in water and feces for at least a month in cold weather. However, in some studies, AI virus dies within a week in hot weather. It’s best to be conservative in estimating how long wild bird-contaminated areas may be a problem.

Innovative poultry tractor and coop designs can minimize the risk for backyard poultry, where commercial-style biosecurity is not possible. For instance, housing feed and water sources for all poultry under a roof, and enclosing coops/tractors in netting too small for wild birds to enter, will reduce exposure. Limiting free range poultry movement by use of netting enclosures can greatly reduce risk. Disallowing access of domestic waterfowl to waterways frequented by wild aquatic birds can greatly reduce risk. Placing wild bird feeders well outside the range of backyard poultry is important to reduce exposure to all poultry diseases; this protects wild birds as well. Releasing birds from winter housing later than usual, to maximize the chance of natural viral reduction after migratory birds have passed through, may help reduce risk.

How do you decide if yours is a high risk flock for AI? All of the following should be considered high risk:

Please contribute your suggestions for biosecurity methods (anne.lichtenwalner@maine.edu), and discuss AI with your fellow poultry owners. Backyard and pastured poultry producers may be able to lead the way in creating sustainable answers to risk reduction for AI in poultry.