Moth Activity Down Slightly, But Still a Threat to Silking Corn

SITUATION
Recent very warm days and nights have pushed maturity of later planted corn. Showers have kept most fields from experiencing drought stress, so overall quality continues to be good. The weather has also allowed insect pressure to remain high. Silking corn is especially at risk due to high numbers of corn earworm throughout the state.

European corn borer:  Moth activity remains low with only one farm in Garland over the five moth per week threshold for silking corn. Most locations caught no moths. Feeding injury by larvae on pre-tassel corn was also low, with no fields exceeding the 15% control threshold.

Fall armyworm:  Moth counts were over the 3-moth threshold for silking corn in Bowdoinham, Cape Elizabeth, Lewiston, Monmouth, Poland Spring, Wayne and one Wells site; but all sites were also under a spray interval for corn earworm, so no additional controls should be needed. Larval feeding damage was over the 15% spray threshold at one Cape Elizabeth site this week.

Squash vine borer:  Moth counts remained low this week. No fields were above the threshold of 5 moths.

Picnic beetles can become a problem during the late summer on silking corn. These beetles are about 1/4-inch long, black with orange spots. They can often be found on stalks and ears that are infested with European corn borer or fall armyworm, feeding on sap at an entry or exit hole. They will also feed on the silks and may work their way into the silk channel. While the damage is usually insignificant, customers dislike finding the insects in their bags. Sprays to control corn earworm should provide control of these beetles if they are found in your field. 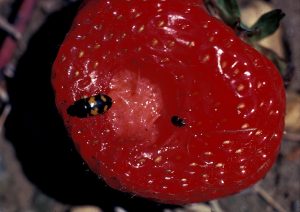 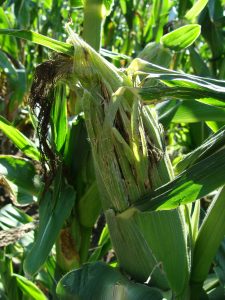 Birds:  Blackbirds have been damaging cornfields in recent days. They are especially attracted to fields where corn has been allowed to get over-mature. For information on wildlife problems and management options, you can call the Animal and Plant Health Inspection Service office in Augusta at 1.866.487.3297.