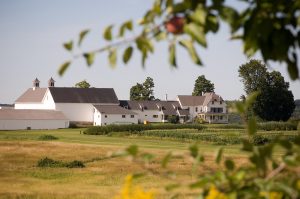 Some much-needed rain and cooler night temperatures over the past week have helped corn development and reduced insect pressure in most fields.  However, moth counts of corn earworm, fall armyworm and European corn borer are still high enough at most locations to require all silking corn be treated to prevent infestation.

European corn borer:  Larval feeding injury from corn borer remains low and was not over the 15% control threshold for pre-tassel corn at any of our scouting sites. However, when combined with fall armyworm feeding, several farms were over threshold in younger corn (see Fall armyworm below).  Moth captures were spotty, but still higher than previous weeks in most locations. Counts were over the 5-moth threshold for silking corn in Bowdoinham, Farmington, Lewiston, Monmouth, Oxford, and Sabattus. Only the Farmington site was not on a spray interval for corn earworm, so an additional spray was recommended there.  These numbers suggest that a second generation of corn borer is now underway.

Fall armyworm:  Fall armyworm remained high at most sites this week, but its distribution is variable.   Trap counts were over the three-moth threshold for silking corn in Biddeford, Bowdoinham, Cape Elizabeth, one Dayton site, Farmington, Lewiston, Monmouth, New Gloucester, Oxford, and one Wells site.  With the exception of Farmington, all of these sites are on a spray interval for corn earworm, so additional sprays should not be needed. A single spray for silking corn was recommended in Farmington.  Larval feeding damage on leaves and tassels of younger corn was over threshold in several locations, and growers should continue to scout fields not yet silking for injury.  When combined with any European corn borer injury found, the control threshold is 13% of plants showing injury.  Sprays for feeding damage were recommended in Biddeford, Bowdoinham, Cape Elizabeth, Dayton, Oxford, and Wells.

Western bean cutworm:  Moths numbers fell at all locations this week.  The highest numbers were in western Maine, and no traps had more than 19 moths, most with fewer than 10.  Fields under a spray interval for corn earworm will also be protected against this pest.

Cucurbit downy mildew reported in Maine: There has been a report of cucurbit downy mildew on cucumbers in Kennebec County this week.  This is a very serious disease of cucumbers and melons, and growers should be on the lookout for symptoms in their fields.  Consult the New England Vegetable Management Guide for details;

CEW: Corn earworm (Only fresh silking corn should be sprayed for this insect.)

Thresholds apply only to corn with exposed fresh silk. Lengthen spray intervals by

one day if maximum daily temperature is less than 80°F.