Fourteen varieties of butternut squash were grown in plots at Highmoor Farm, the Maine Agricultural Experiment Station in Monmouth, Maine during the 2014 growing season to evaluate plant growth, yield and fruit qualities, and to determine the effects of transplant root dip treatments of Trichoderma (RootShield Plus ®) on subsequent plant health. Seeds were planted into 3” peat pots on June 6 and grown in the greenhouse until they reached the two true leaf stage of development. They were transplanted to the field on June 19. Just prior to planting in the field, one half of the transplants were soaked in a solution of RootShield Plus® Trichoderma, plus a dilution of 20-20-20 soluble fertilizer. The other half of the transplants received a dip containing only the liquid fertilizer. Each plot had three plants, and was covered with black plastic mulch prior to planting. 500 lbs. per acre of 10-10-10 granular fertilizer was incorporated into the soil prior to planting. Plots were harvested in late September. Marketable fruit from each plot was counted and weighed, and observations of fruit appearance and internal characteristics were recorded. Statistical analysis showed that the Trichoderma root dip treatments had no significant effect on plot yields, so the data from the treated and untreated plots were combined for each variety. 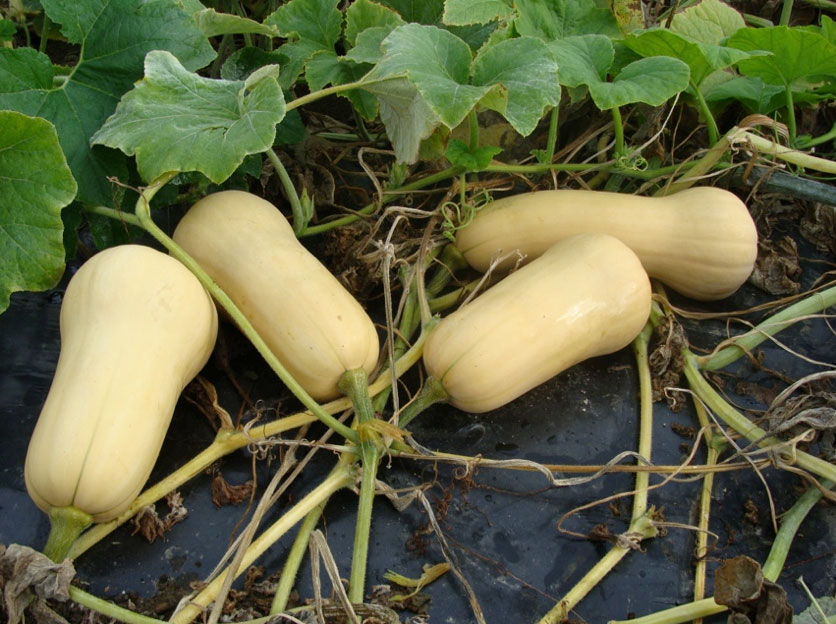 Fruit size and yield varied significantly between the butternut squash varieties in this trial (see table below). The largest varieties had fruit averaging over seven pounds, and the smallest varieties averaged just over three pounds. The number of fruit per plant also varied significantly, with some varieties yielding over five fruit per plant while others bore an average of only 3 fruit per plant. Highest yielding varieties by weight tended to have larger fruit size and fewer total number of fruit per plant. Atlas was the highest yielding variety by weight in this trial (70 lbs./plot), and also had the largest fruit size. The fruit was characterized by long, thick necks, and some ribbing around the seed cavity. Ultra HP also had extra large fruit with very long necks. The fruit was quite variable in size and shape. Although these varieties had very large fruit size, and high yields by weight, both Atlas and Ultra had the lowest number of fruit per plant. Avalon was also among the large-fruited, high-yielding varieties, but its shape was blocky and more uniform. It also produced significantly more fruit than the other large-fruited varieties. Waltham, Victory, and XRB4757A were classified as medium-large for this trial, with most fruit weighing over three pounds. All of these varieties had good yields, but XRB4757A had the best shape and uniformity. Betternut 1744 and Betternut 410 both had good total yield, but smaller fruit size, averaging just under three pounds. Betternut 1744 was among the latest to ripen, and had more variable shape. Although Betternut 420 was earlier and more uniform, some fruit showed a type of fasciation, where the stem tissue would run down the length of the fruit. Butterfly and Betternut 900 had a similar fruit size of just over three pounds. The yields were also similar, although Butterfly had more variable maturity and Betternut 900 had a more variable shape and higher cull rate. JWS 6823 PMR, Metro, PMR and Chieftain had the smallest fruit in the trial, averaging just over two pounds, and were among the lowest yielding varieties by weight. Fruit size of JWS 6823 PMR was variable, while Metro PMR and Chieftain were more uniform. Metro was among the latest maturing varieties. RXB4756A was among the lowest yielding variety in the trial, but it had larger fruit than the other low yielding varieties, averaging just over three pounds. The fruit also had longer, thicker necks than the smaller fruited varieties and was among the last to ripen.

Based on the results of this trial, Avalon performed best among the larger-fruited varieties (4 lbs.), having good yields and the most uniform size and shape. For medium-sized fruit (3+ lbs.), XRB4757A performed very well, having good yields and very attractive fruit, although perhaps a little too large for some customers (3.8 lbs.). Waltham and Butterfly produced good yields with attractive 3+ lb. fruit. For smaller fruited varieties (2+ lbs.), Metro PMR and Chieftain produced attractive, uniform fruit in good numbers, but total yield by weight was relatively low. These best performing varieties are pictured below.

Three plant plots spaced 4’ x 10’, each variety replicated three times. Transplanted three weeks after seeding in the greenhouse on June 19, 2014. Plots were covered with black plastic mulch. One-half of the plots received a drench with RootShield® (Trichoderma sp.), but no differences were observed, so the data was combined. 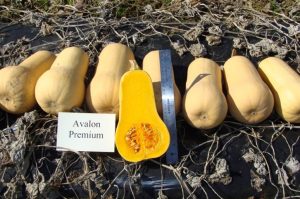 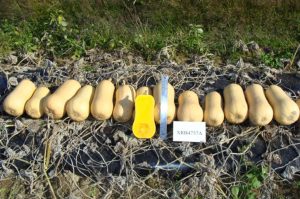 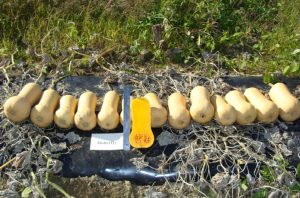 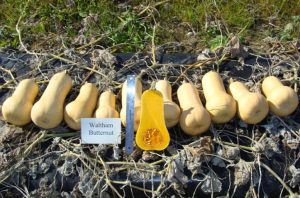 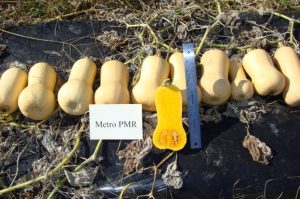 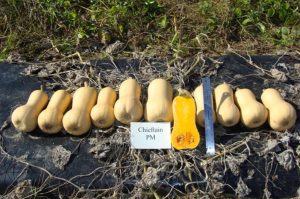