Sixteen varieties of sugar-enhanced (se) and synergistic (se+, syn, etc.) sweet corn were trialed in plots at Highmoor Farm, the Maine Agricultural Experiment Station in Monmouth, Maine during the 2013 growing season to evaluate their performance in stand, yield, and ear qualities. The seeds were planted by hand on June 19 and 20 with jab planters into plots 30 feet long and six rows wide, with 36 inches between rows. Each of the sixteen varieties was replicated in plots four times within the planting. Fertilizer and pesticide applications followed regional recommendations.

Harvest began on September 4 with the earliest variety and ended on September 26. Each plot was evaluated for stand, based on how many plants were established within 30 feet of row; plant height, ear height (distance off the ground), picking ease (rated on a scale of 1-3 with 3 being the best), tip cover (rated on a scale of 1-3 equaling approximately the number of inches of cover above the tip), ear length, and the number of rows of kernels per ear. Ear quality parameters were based on a sample of 10 ears from each plot. Yields were relatively uniform, generally reflected plant stand, and averaged slightly less than one ear per plant. Some of the lower yielding varieties clearly suffered from the excess water in some of the plots, and so may not have reflected their true yield potential. The highest yielding varieties included Vitality, Profit, Pow Wow, Espresso, and Delectable. The lower yielding varieties included JSS.OGC1, Pay Dirt, Allure, and Ka-Ching, although the latter two were clearly impacted by flooding. None of the yield differences were statistically significant.

Plant characteristics for the varieties were more variable this year than in the recent past and heights were generally lower, due to the excessive water during the early growth stages. Pow Wow had the best ear height at over 20 inches, making hand harvest easier, followed by Delectable and Cuppa Joe. Primus, Jackpot, JSS.OGC2 and Ka-Ching also had good ear height. Pay Dirt, Ecstase II, Espresso and Vitality had the lowest ear height, with Pay Dirt averaging only 8.5 inches off the ground. Sparkler, Ka-Ching, and Allure were among the easiest varieties to harvest on our scale of one to three, along with Pow Wow and Ecstase II. The most difficult ears to remove from the plants were Primus and Jackpot, followed by Pay Dirt, Cuppa Joe, Profit, JSS.OGC2, Delectable and Harris 1001. The husk best tip cover over the ears was found on Espresso, Sparkler, Primus, and Profit, followed by Ka-Ching and JSS.OGC2. The poorest tip cover was found on Cuppa Joe, followed by Pow Wow and Harris 1001.

Ear size was fair to good for most varieties this season. Delectable, JSS.OGC1, Primus, and Ka-Ching had the largest ears; averaging about 8 inches, Cuppa Joe, and Jackpot also had good ear size. Ecstase II produced the smallest ears in the trial, averaging just over six inches. Sparkler, Pay Dirt, Vitality, Harris 1001, and Profit all averaged below eight inches. The highest row number of kernels on each ear was found on Delectable, Allure and Sparkler. Higher row counts tend to give the ear a more refined look and better visual appearance. Pow Wow and JSS.OGC2 also had high row counts, followed by Harris 1001 and Jackpot. The lowest row numbers on ears were found on Ecstase II and Pay Dirt.

Highmoor Farm crew favorites for overall best growth habit and ear quality this year, listed in order of maturity (earliest to latest) were:  Vitality (68 days), Espresso (70), Allure (78), Ka-Ching (78), Pow Wow (78), and Delectable (84). You can see photos of these below. We’ll be testing more varieties in 2014, and look forward to sharing our findings with you.

1Tukey’s HSD test: differences between values within a column must be greater than this to be considered significantly different.

2Picking ease rated on a scale of 1-3 with 3 being the easiest or best. 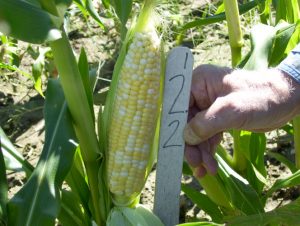 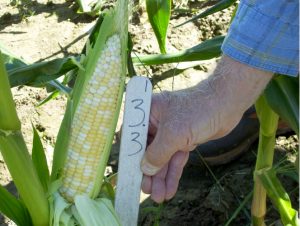 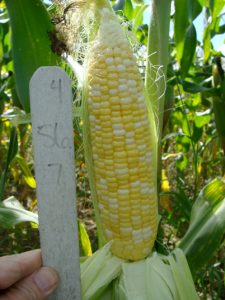 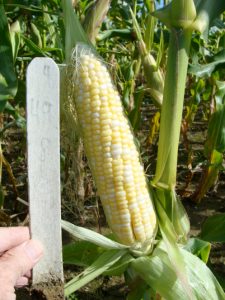 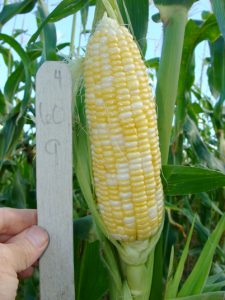 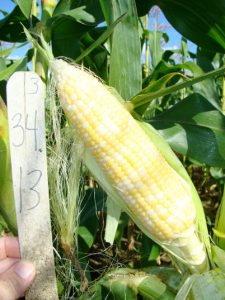