Eighteen varieties of supersweet (sh2) and augmented supersweet (sh2+, etc.) sweet corn were grown in plots at Highmoor Farm, the Maine Agricultural Experiment Station in Monmouth, Maine during the 2014 growing season to evaluate their performance in stand, yield, and ear qualities. The seeds were planted by hand on June 9 and 10 with jab planters into plots 30 feet long and five rows wide, with 36 inches between rows. Each of the sixteen varieties was replicated in plots four times within the planting.  Fertilizer and pesticide applications followed regional recommendations.

Harvest began on August 29 with the earliest varieties and ended on September 12. Each plot was evaluated for stand, based on how many plants were established within 30 feet of row; plant height, ear height (distance off the ground), picking ease (rated on a scale of 1-3 with 3 being the best), tip cover (rated on a scale of 1-3 equaling approximately the number of inches of cover above the tip), ear length, and the number of rows of kernels per ear. Ear quality parameters were based on a sample of ten ears from each plot.

All of the varieties performed reasonably well in this trial (see table below). The soils were warm and dry at planting, so stand establishment was initially good.   However, rain after plant emergence reduced the growth rate in the more poorly drained areas of the field. XT2472 had the best stand, followed by XTH20173, Stellar, 7112R and Higlow 8902 MR. Primus, 7002R and XTH2673 had the poorest stands, but even these were acceptable, and the range may been effected by location in the field and drainage more than germination or seedling vigor.

There were some significant differences among plant characteristics. Mirai 315 had the best ear height at 25 inches, making hand harvest easier, followed by Essence, Mutiglow 7220R, Stellar, 301 BC and Higlow 8902 MR. AP 358 had the lowest ear height at 13 inches, with XTH2673, Primus, XTH2074, 7602, and Multisweet 2340 also having relatively low ear height.

Ear size was good to very good this season, although there were some significant differences between varieties. Primus and Higlow 8902 HR had the largest ears; averaging 8.4 inches, Mirai 315, Allure, Essence and XTH2472 also had good ear size, averaging 8 inches or better. Awesome XR and XTH2074 produced the smallest ears in the trial, averaging just over seven inches. Other varieties averaged just below eight inches.

Highmoor Farm crew favorites for overall best growth habit and ear quality this year, listed in order of maturity (earliest to latest) were: Stellar, 7112R, and Higlow 8902 MR. Other varieties that performed very well include: XTH20173, Awesome XR, Multiglow 7002R, Allure, Essence, and Multisweet 2340. You can see photos of these below. We’ll be testing more varieties in 2015, and look forward to sharing our findings with you. 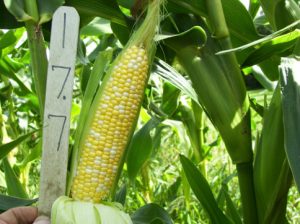 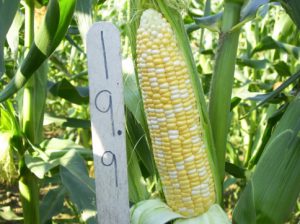 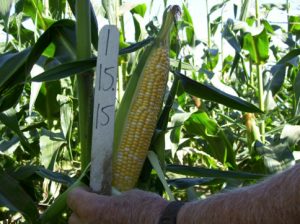 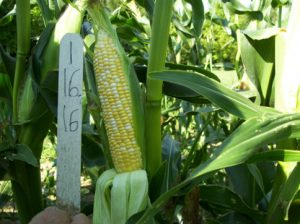 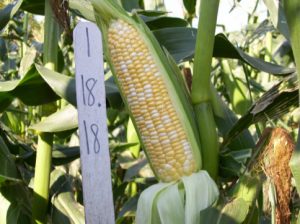 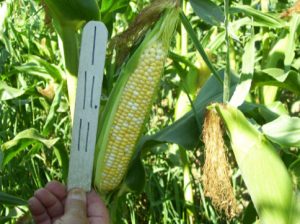 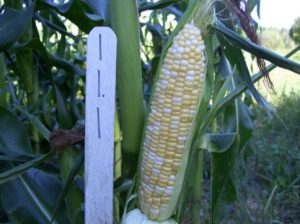 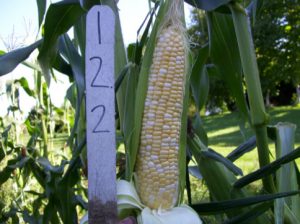 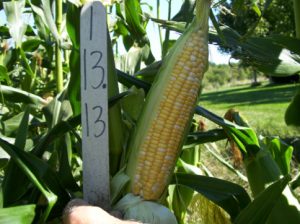