Potato flea beetles are a small black hopping insect. This insect is much easier to spot when the plants are small.

Potato flea beetle damage will appear as a number of “shots” in the leaflet. This type of damage can predispose the plant to early blight because of the amount of damaged tissue.

Potato flea beetle larvae feed on potato tubers. The typical damage is either small holes or tunnels on the surface of the tubers. Feeding damage does not usually extend more than 3/8 inch into the tuber. 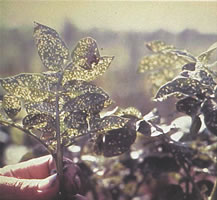 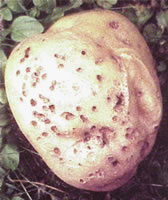