Given access to water, it has been a great season for growing veggies like tomatoes, peppers, beans, and basil. With the first hard frost is in sight there are a few easy actions to take to get those crops to last just a bit longer into the fall. There are also several strategies to use early in the spring, or when planting a fall crop that can help to extend the season. 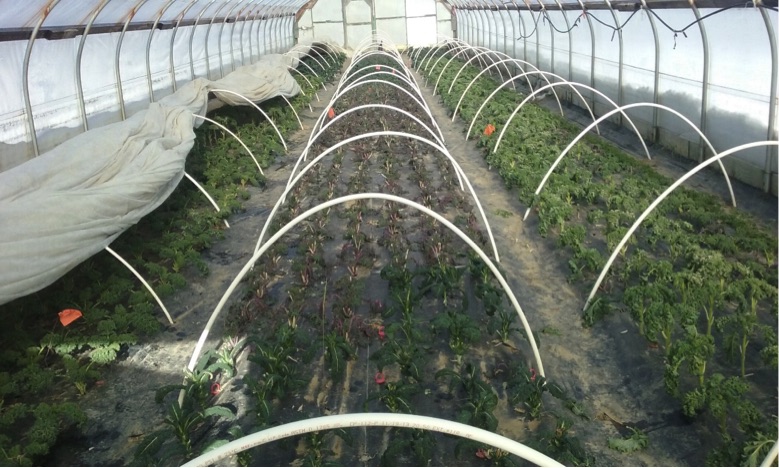 The first step in protecting against frost, is recognizing when a frost is coming. Paying attention to the weather person is important for this. If the forecast is calling for temperatures at or below 35ish, with calm, clear skies you might want to take action. The lack of cloud cover lets the warm air rise into the atmosphere, while the lack of breeze allows the coldest air to sink down low around your plants, without mixing with the warmer air, creating conditions for water vapor to freeze on your veggies and cause cell death.

When you anticipate a frost, take action to harvest or protect your cold sensitive crops. This list has information about first and last frost dates in the state and approximate planting times for different crops.

Crops that can be planted early in the spring and late in the fall are typically frost tolerant, while mid-season crops are not. With a first frost on its way, focus on either harvesting those cold sensitive crops (eg. basil, tomatoes, and beans), or covering them with row covers or blankets. As long as the row covers are not touching the crop, warm air will stay trapped around the crop, and the frost will land on the row cover, and not the crop. Protecting your crop against one early frost may gain you two to three weeks at the end of the season.

Select Crops that are Cold Tolerant

When planning your garden, select crops that can withstand cold for early spring plantings or late fall harvests. Planting crops like peas, spinach, lettuce, and radishes early in the spring can give you a good jump on the season. Seeds of these crops will germinate in cooler soil temperatures and will survive a light frost. Crops in the brassica family (eg. cabbage, kale, brussels sprouts, kohlrabi, etc.) can withstand freezing temperatures and are a great choice to plant for late fall harvests. Roots crops are often undamaged by frosts, just be sure to get them out before the ground freezes solid! While these crops can withstand cold temperatures, some gain in flavor after light frosts as starches in crops like parsnips and spinach are converted to sugars.

Changing the Climate Around Your Crops

Increasing the temperature directly around your crop and putting up a protective layer against frost can be an effective way to extend your growing season. Planting through black plastic mulch on the soil can increase soil temperatures by as much as 5˚F compared to bare soil. The warmed soil can then radiate that warmth throughout the night to guard against a light frost. Plastic mulch will also encourage faster crop development in the cooler months.

Row covers, which can be either light weight spunbonded woven material, or slitted clear plastic. These can increase temperatures by a few degrees and act as a physical barrier against frost. Spunbonded row covers have the added advantage of physically excluding insect pests and can be a great tool for getting your crops established in the spring.

Cold frames are often constructed from old glass doors or windows. Think of cold frames as a mini greenhouse. Materials for constructing a cold frame can usually be picked up for free, and can greatly lengthen your growing season. Prop the glass top open on sunny days to prevent your crop from overheating, and close it late in the afternoon to trap in heat for the evening. Cold frames work well for planting greens or holding root crops late into the winter.

High tunnels and greenhouses are a larger investment, but well worthwhile if you are serious about increasing your growing season. Putting up these large plastic structures allow large areas to be planted with cold tolerant crops to push into the winter, and can then extend your season for warm season crops like tomatoes, climbing cucumbers, and peppers.

Stack these tools and techniques for extending the season even longer. Kale on plastic mulch, under row covers, in a high tunnel can last all winter (see picture)! Pushing the vegetable growing season later into the fall and earlier into the spring increases the amount of local food that is available to us. Canning and processing that food is another way to get us through the whole winter with food from the garden. There is nothing like emptying your last can of tomatoes when the first early season tomato is ready to pick!