Eastern white pine is found throughout the eastern portion of North America, where the climate is cool and humid. It grows well in a variety of soils and has a fast growth rate relative to other tree species within its habitat range. It is a long-lived species, able to grow for 200 years or more. With age, white pine can become 150 ft high and over three feet in diameter. The size and straight trunk have made it an important source of lumber for building. White pine has also been used as a traditional Christmas tree due to the conical shape of the tree and soft needles.

Within the ecosystem, white pine serves as a shelter for forest dwellers. Many bird species, as well as squirrel and deer, are known to feed on the seeds.

This species is being monitored for its economic and ecological importance. Additionally, it affects the public health as an allergen during the period of pollen release.

Needles: White pine is an evergreen species with thin needles growing in clusters of five. This can be helpful for identification if one remembers that the number of letters in “white”, five, equals the number of needles in the cluster. Needles typically grow between 2 ½ -5 in long.

Bark: On younger trees, the bark is thin and smooth. Mature trees have dark gray to brown bark that is fissured, showing ridges and deep indents.

Cones: White pine are monoecious, meaning each tree can produce male and female cones. This occurs in the spring, typically between May and June. Male cones have overlapping scales that open to release pollen. Female cones can be up to 8 in long and one inch in width. They begin green in color and ripen to brown when the seeds are mature and ready to be released into the wind. 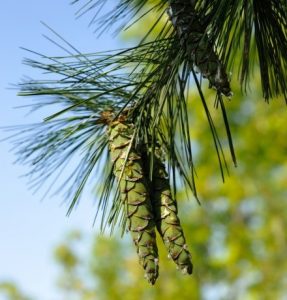 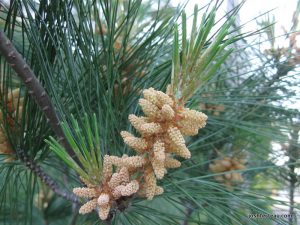