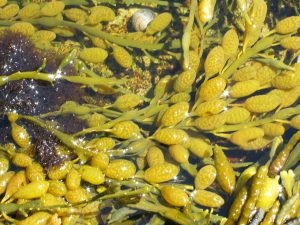 Ascophyllum nodosum, more commonly called Rockweed, is a species of brown algae or seaweed that is found along the New England coast.  It grows on available hard surfaces, including rocks, shells, and dock pilings.  Rockweed averages in length between 20-30 inches and can grow longer where there is less wave action to cause breakage.

Why choose this species?

As a member of the New England coastal habitat, Ascophyllum nodosum has multiple important roles that impact a variety of other marine species. First, the fronds of the rockweed create a protected canopy for organisms. This sheltered habitat hides smaller organisms from predators and can prevent desiccation of intertidal species when the water recedes at low tide.

Less visually obvious is the impact that rockweed has on seawater chemistry. Increasing concentrations of carbon dioxide (CO2) in the atmosphere due to the burning of fossil fuels result in an increase in the uptake of CO2 by the ocean. When CO2 dissolves in seawater, carbonic acid is formed and the process is called “ocean acidification.” A series of chemical reactions between CO2 and seawater lower the pH, making the water more acidic. This is problematic for shell producing organisms in particular. Photosynthesizers, such as rockweed, require CO2 and reduce its levels by using it to produce their own food, thereby also regulating the pH. Additionally, oxygen is a helpful byproduct of photosynthesis that many intertidal animal species utilize for respiration. By regulating these dissolved gases, rockweed helps in maintaining water quality along the coast.

Finally, rockweed serves as a source of food along the coast. While some species feed on the fronds themselves, others may benefit from the reproductive efforts of the rockweed.  Rockweed reproduces externally by releasing sex cells into the water. Organisms, such as filter feeders, can consume those cells as a source of nutrients.  Scientists are currently studying the role of rockweed reproductive cells in the food web and whether intertidal organisms may be using this nutrient input as an energy source for their own phenophase changes.

Thallus: The body of the rockweed, called the thallus, is composed of long flat fronds that lack a midrib.  Rockweed shows axial growth, meaning branching occurs from a central thallus. Both new and regenerative growth occurs at the ends of the fronds.

Air Bladders: Vesicles, or air bladders, create buoyancy for the rockweed. They lift the rockweed up towards the sunlight that is necessary for photosynthesis to occur. Air bladders occur separately along the thallus and typically form once per year.

Holdfast: Marine algae do not have roots because, unlike plants on land, algae are able to acquire necessary nutrients from the surrounding seawater.  Though its appearance resembles a root bundle, the primary role of a holdfast is to secure the rockweed to a solid surface.

Receptacles: Reproduction occurs in the spring or early summer when receptacles that began forming in the prior year enlarge and develop. A color change and the presence of raised dots indicate that a receptacle is reaching maturity. When the surrounding seawater reaches a minimum temperature, sex cells (eggs and sperm) are released into the water for fertilization.  Empty receptacles fall off the algae when reproduction is complete.

Growth: Starting in the second year, rockweed produces an air bladder at the tip of its main frond. Counting the air bladders on the longest frond can give an age estimate, though regeneration at the tip prevents complete accuracy. Measuring the distance between the air bladders shows the extent of annual growth, which averages 3-4 inches along the Maine coast.

Commercial Uses: Rockweed is harvested for a variety of commercial uses. As a packing material for lobsters or marine bait worms, it provides needed moisture to live organisms during shipping. Rockweed is added directly to gardens as fertilizer and mulch. With processing, it becomes a nutritional additive, providing vitamins and trace elements for pet and livestock feed. Chemical extraction removes a compound called alginate that is used as a thickening agent in food, cosmetics, and some paints.