Cranberries and a Changing Climate

This is the web/text version of a Powerpoint presentation given at the University of Maine in Orono by Charles Armstrong, UMaine Extension’s Cranberry Professional, in 2016.

Slide 3: What do cranberries like/need? Indigenous to the Temperate Zone (Vaccinium macrocarpon – native only to North America); acidic pH (4.0 to 5.5); full sun (generally the more sun, the better); optimum growth occurs from 60°F to 80°F; cool temperatures when fruit are maturing (as temperature goes down, anthocyanin production goes up); access to abundant water (‘boggy’/peat habitats); cold winters (to satisfy the plant’s chilling requirement)

Slide 4: Winter ‘resting’ period (chilling requirement) Cranberry plants have what is called a “chilling requirement.” Abnormal blossoming has been observed to take place in Massachusetts when plants received less than 1500 hours (~62 days) below 45°F during the winter. This resulted in abnormal blossoming called “Umbrella Bloom” in which the stem above the flowers does not grow or does not grow very much.  There is also some evidence to suggest that the chilling hours may be lost during ‘ups and downs’ of temperatures that often occur in the Northeast in December and January, such that chilling hours may have to start accumulating all over again. 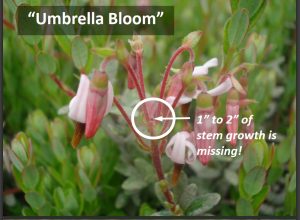 Slide 5 (Photo): Photo showing the physiological condition in cranberry called “Umbrella Bloom” where the normal 1″ to 2″ of stem growth above the flowers is greatly reduced or entirely absent.

Slide 6: Without the 1” to 2” of stem growth (with accompanying leaves), there is very little photosynthetic carbon available to the upright; thus, usually no more than just onecranberry per stem is obtained on those stems, when otherwise two or more berries per stem would be possible. Potentially a 50% yield reduction if going from 2 berries per stem to only 1 berry per stem.

Slides 8 and 9: Climate Projections for the Northeast — Figures taken from a report by the USDOT’s Federal Highway Administration (using data from USGCRP): https://www.fhwa.dot.gov/environment/climate_change/adaptation/publications/climate_effects/

Slide 14: Bee Protection: Hotter summers will put added stress on the bees, so it will be more important than ever to consider bee toxicity when a pesticide is applied during any period when bees could be exposed. The list of products for cranberries is sure to look different in the future, but this is how it looks as of 2016 for “Relative Risk Quotient” which is the ‘use rate’ of the product divided by its toxicity (the Relative Risk Quotient is shown in parentheses after each product name):

Slide 16: Higher Temperatures; Likely Consequences: more False armyworm, more Cranberry weevil, more Winter moth
Of all our cranberry pests, we should review or familiarize ourselves with the first two pests in particular since these two are already increasing in occurrence and have been a consistent problem on Maine cranberry beds yearly. Winter moth has yet to be discovered on any of our cranberries [in Maine] but that could change if it continues to spread to more towns and regions of the state; it ‘is’ a large problem on Massachusetts cranberry bogs. 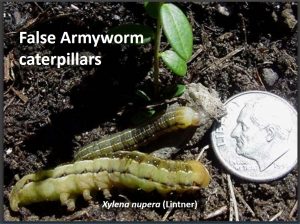 Slide 17 (Photo): Photo of a pair of False Armyworm caterpillars next to a US dime for scale purposes.

Slide 18: So what’s so bad about False Armyworm?
Life Cycle: There is a single generation per year. The moths which have overwintered mate in the early spring. Each female moth can lay roughly 600 eggs in masses of sometimes 100 or more that they place on the cranberry stems or the undersides of the leaves in late April through early May. The eggs hatch typically in mid to late May. The caterpillars mature at the end of June, then move to the ground where they ‘rest’ for two to six weeks before pupating. The moths emerge from mid to late August through the end of September, and seek out protective places to spend the winter.

Slide 19: So what’s so bad about False Armyworm?
Cranberry Injury: Early Season (late May through early June): The caterpillars are the damaging stage, and when they are young, they can do great damage by chewing out the centers of the terminal buds before the new growth begins. Summer: The caterpillars grow hand in hand with the cranberry growth, eating more and more as they increase in size and feed on leaves, buds, and flowers, eventually reaching 1.5-2” in length at maturity. Upon reaching their larger size of 1” or more, they will begin to feed primarily if not exclusively at night in order to avoid being seen by predators. 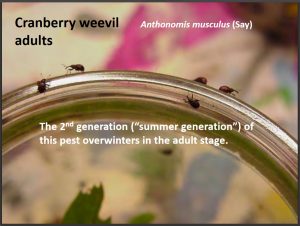 Slide 21 (Photo): Photo of five cranberry weevils crawling along the edge of a small glass jar (a baby food jar), with text that says: Cranberry weevil adults, Anthonomus musculus (Say); The 2nd generation (“summer generation”) of this pest overwinters in the adult stage.

Slide 22: So what’s so bad about Cranberry weevils?
Cranberry Injury — Springtime: Weevils which have overwintered begin to move onto the beds from the surrounding uplands and will drill holes into old leaves and in the terminal buds. Mid-June through early July: The weevils mate, and move to the new cranberry growth, especially new terminal growth and new buds which can be damaged severely from their feeding holes. Flower buds that are damaged often fail to open, dry up, and then eventually fall to the ground. Eggs are deposited into the unopened blossom buds, where the subsequent weevil larvae develop. Females will chew on the pedicels after depositing their eggs, either severing them completely, or only partially, creating a point of weakness that often leads to the pedicel breaking off later on. Buds that remain attached but contain a larva turn from pink to a brownish-orange. In short, a heavy infestation can destroy much of the prospective crop due to blossom bud losses, and the brand new weevils emerging from them may also damage any berries that are present.

Slide 24: Climate Projections for the Northeast — Figures taken from a report by the USDOT’s Federal Highway Administration (using data from USGCRP): https://www.fhwa.dot.gov/environment/climate_change/adaptation/publications/climate_effects/

Slide 26: Rise in precipitation and/or its intensity (likely consequences): 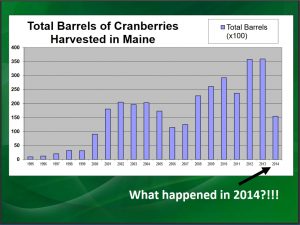 Slide 30: Further Study: Check out Cornell’s Northeast Regional Climate Center at: http://www.nrcc.cornell.edu/ Also, consider viewing the USDA report entitled: “Adaptation Resources for Agriculture: Responding to Climate Variability and Change in the Midwest and Northeast.” It is meant to help producers prepare for, cope with, and recover from extreme weather and uncertain climate conditions and may be found online at: http://www.climatehubs.oce.usda.gov/sites/default/files/adaptation_resources_workbook_ne_mw.pdf?utm_medium=email&utm_source=govdelivery

Instructions:  You can email the information being asked on this form, as well as your quiz answers (or photos of the completed papers) to Charles Armstrong at charles.armstrong@maine.edu or, alternatively, you can print out this completed page and your quiz answers, and mail to the Umaine Extension Diagnostic and Research Laboratory, c/o Charles Armstrong, 17 Godfrey Drive, Orono, ME 04473.

License Information: (check all that apply and enter your license number if available)

Under penalty of law, by signing below I certify that I am the true and actual license holder named above.  I understand that under no circumstances shall anyone but the above named individual sign below.

Answer Sheet for: “Cranberries and a Changing Climate” University of Maine Cooperative Extension. Instructions:  You can email your quiz answers (if that is an option for you) to Charles Armstrong at charles.armstrong@maine.edu or, alternatively, you can print out this page with your quiz answers indicated, and mail to the Umaine Extension Diagnostic and Research Laboratory, c/o Charles Armstrong, 17 Godfrey Drive, Orono, ME 04473.

A score of at least 80% correct will earn you one pesticide credit towards your pesticide license.

For ‘true/false’ questions, please write the entire word rather than just “T” or “F” so there is no confusion over which answer you mean.